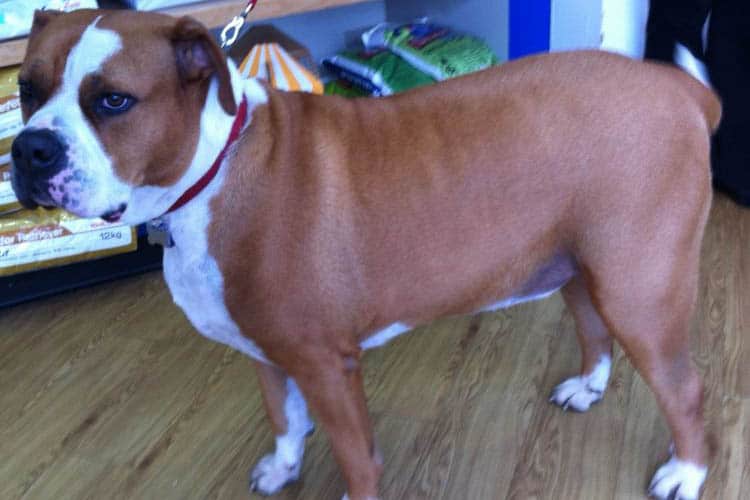 Trying to collect one of every ailment!

Being a Mastiff cross, Milo is a big boy but he has had more than his fair share of problems recently. Despite this he remains one the softest, friendliest dogs you are ever likely to meet.

As he is a large, energetic dog, Milo’s legs were always going to be under pressure. Sure enough, a few years ago when he was still young, he was diagnosed with a tear to the cruciate ligaments in both of his knees. This ligament is essential for normal joint function as it attaches the femur (thigh bone) to the tibia (shin bone) and limits the normal range of movement for the joint. Untreated, the instability in the joint leads to severe arthritis and tearing of the joint cartilage which can be very painful.

After discussing the options with Milo’s mum it was agreed that the best option was to stabilize the joints and minimize the ongoing trauma to his legs by performing a surgical procedure known as a TTA (or tibial tuberosity advancement), first on one leg then the other. This surgery involves making a cut in the tibia to create a change in the geometry of the joint, making the ruptured ligament redundant. (for more information on this condition click here). Milo made a fantastic recovery from these operations performed here at Maven and he returned to having good limb function.

Once he had recovered from these operations, Milo was well for a couple of years, but then he developed a swelling on his back, just above the base of his tail. This made our usually happy and bouncy Milo into a very sad individual, not wanting attention and not flying round the park as normal. He had some radiographs and had to be referred for an MRI to assess his spine. Milo was found to have marked lumbosacral disease (where there is new bone formation between some of the bones in his spine over his hips, causing a reduction in movement and some chronic pain) and a bulging inter-vertebral disc causing a 30% narrowing of his spinal canal in that area. Luckily he did not need yet another surgical procedure for this. Instead, he has done incredibly well using anti-inflammatory medications to control the inflammation and soreness, meaning that he can still run around and play with his friends in the park as normal.

It’s not just orthopaedic problems that Milo has had to endure. Milo also began suffering from troubles with his skin, so much so that his normally dark nose had turned white due to a loss of pigment! He also had unexplained weight gain (even though he was a very energetic dog!) and was frequently breaking his fragile toe nails. This time Milo needed a blood test and we were able to confirm that he had an underactive thyroid gland. This condition is a common ailment in dogs, causing a wide variety of symptoms including those that Milo demonstrated. He is now given tablets every day with a synthetic thyroid hormone replacement drug that replaces the effects of the natural hormone, which has allowed him to return to a normal way of life once again, although his natural pigmented nose will not return!

Most recently, Milo came back in to us this month unwell again, this time with vomiting, lethargy and clearly in pain with his tummy. Upon examining him, we were concerned that there was something more going on than just an upset tummy, so Milo was admitted to the hospital. He needed supportive care with intravenous fluids, strong intravenous pain relief and medications to prevent him from feeling sick and to support his digestive function. In addition to the treatment Milo also needed further investigation. A blood test run in the clinic revealed that he was suffering from a painful condition called pancreatitis. The pancreas produces some of the enzymes involved in the process of digestion and can become inflamed very quickly if the gastrointestinal system is not functioning as it should. Milo responded very well to the intensive care given at Maven for the pancreatitis and was able to return home after a two night stay with us to continue his recovery at home. However, whilst he was with us we also arranged for Milo to have an ultrasound scan to ensure the diagnosis of pancreatitis.

His ultrasound scan was conducted by European imaging specialist Andrew Holloway. Andrew was able to confirm the diagnosis of pancreatitis but, unfortunately, he also found another problem for Milo. Andrew identified that Milo had one very abnormal enlarged adrenal gland. From the ultrasound it was unclear as to whether this is a benign change within Milo’s adrenal gland or something more serious, so he is being referred to a specialist center to have an advanced CT scan which will help determine the next steps for Milo.

We wish him well and will be keeping a very close eye on his progress.