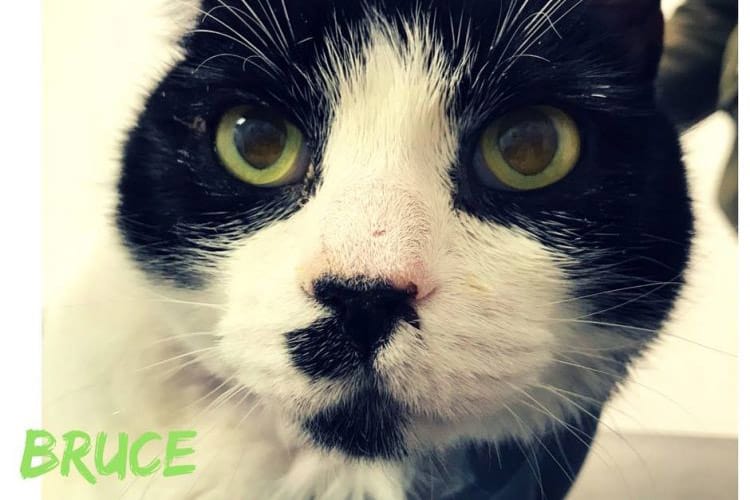 Reason for Nomination: Surviving being hit by a car

Bruce is a lovely 5 year old cat who had an unfortunate incident with a car. His accident was witnessed and thankfully he was able to be brought for treatment straight away. As Bruce’s accident was out of normal working hours he was first seen by Vets Now Sutton who are a veterinary company that provide emergency care for our patients here at Maven Vets when we are closed.

As Bruce wasn’t brought in by his owners he was checked on admission for a microchip. Thankfully Bruce had a microchip and this gave us the details of his worried owner who came straight down to be with him.

Bruce must have suffered quite a knock from the car as he needed emergency treatment for shock. It was obvious initially that his back left leg was broken but when a patient is presented in an emergency it is very important that we focus first on maintaining circulation and breathing and providing adequate pain relief so they are not suffering while we assess for any life threatening injuries. Once the patient is stable we can then assess for other possible injuries and treat the more obvious injuries, such as Bruce’s broken leg.

To assess Bruce properly he needed a scan initially. There are some injuries which are more common when a patient has been hit by a car. The bladder can be susceptible to rupture as well as the diaphragm, these can both be life threatening conditions and need addressing as soon as possible. An emergency ultrasound was used to assess Bruce’s chest and his abdomen for internal bleeding and organ damage, which thankfully revealed no problems initially. Cats are also quite prone to pelvic fractures which are difficult to assess without x rays.

The following morning Bruce was anaesthetised and x rays taken of his chest, pelvis and left hind limb. This confirmed a fracture of his femur (thigh bone), two broken ribs and contusions (bruising) on his lungs. Bruce also had a broken canine tooth but thankfully Bruce had been lucky not to sustain any pelvic injuries or organ damage. The contusions on his lungs could have be life-threatening as apart from supportive care and time there is nothing that can be done to stop this. As with any bruise, it can get worse over time before it gets better but again thankfully for Bruce an x-ray a few days later revealed the bruising was improving. Bruce needed an operation to repair the fracture of his leg. A pin and screws with a plate were used to stabilise his fracture and post-operative x rays showed adequate alignment of the bones which would allow the fracture to repair. During the same operation, his broken canine tooth was removed and a feeding tube placed as Bruce clearly had some trauma around his face and wasn’t eating by himself. After a few days of syringe feeding down the feeding tube and lots of nursing care, Bruce began eating on his own and was seen to be using his fixed leg a little. Therefore, he was discharged from the hospital and able to go home with his owners.

Bruce continues to do well and we hope to see him again soon!

Bruce’s story has a happy outcome. However, had he not been microchipped we would not have been able to contact his owners and Bruce would have been thought to be a stray. We do see a lot of cats that are thought to be strays either if they are unwell or if they have been hanging around someone’s garden. These cats are not always strays and if they are fed they tend to come back for more, even if they have their own home elsewhere. Cats can be on a special diet so unless you are very worried about a cat’s health then we would encourage you not to feed them.

When stray cats or injured cats are brought in to us it is a big relief to find a microchip as most of the time we can then reunite them with their owner. Bruce was very lucky in this regard. However, not all cats are microchipped and of the ones that are chipped not everyone remembers to keep their contact details up to date. Have you updated yours recently? For more information on microchipping please visit our microchipping page.