Hamish is a lovely 9 year old west highland white terrier. He came in to us in December 2020 as he was lethargic, drinking a lot and had a reduced appetite.

Even though the initial clinical examination was fairly unremarkable, the history from his family was a concern for us. He was admitted to our hospital for blood tests and supportive care.

The blood test showed that he had raised blood glucose, a slightly low blood 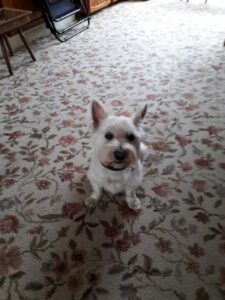 potassium and a positive result for pancreatitis (inflammation of the pancreas). Because of the high blood glucose and his clinical signs, we also analysed his urine. The urine unsurprisingly had a lot of glucose present but, importantly, also contained something called ketones.

We now had a clearer picture of what was causing Hamish’s illness.

Hamish had developed diabetes mellitus (DM). He had also developed pancreatitis which had resulted in him developing a complication of DM called diabetic ketoacidosis (DKA). Hamish was a very sick boy and he would need intensive care to help him recover.

Diabetes mellitus is a condition where the body has issues with insulin. Insulin is a ‘gateway’ for glucose to move from the blood-stream into the cells. The cells need glucose for energy. Without this gateway the cells are starved of glucose and therefore energy, resulting in a state of lethargy.

The high levels of glucose in the blood results in increased excretion of glucose into the urine. As glucose draws water (osmosis!) this causes more urine to be produced that in turn results in an increased thirst, which was one of Hamish’s presenting complaints.

As the body is starved of glucose, it tries to create energy from other sources, such as fat. Fat is broken down to ketone bodies which the body can use as an alternate energy source. 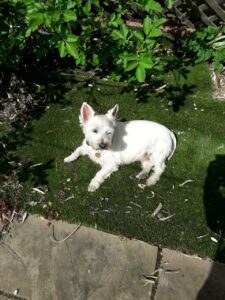 If diabetes is uncontrolled, as we were seeing in Hamish, then through a series of complex metabolic processes, the production of ketones can escalate and exceed the body’s ability to use them up. Some of these ketones are acidic in nature which makes the blood acidic (blood PH is normally very carefully maintained at a narrow neutral range). The kidneys also start to excrete more ketones which draws other molecules like potassium out with it (another very important molecule that is normally maintained in a narrow range by the body). Hamish had also developed low blood potassium. These changes result in a state of shock for the body which can be life-threatening.

DKA can also be precipitated by other illnesses. In Hamish’s case, we suspected that he had developed pancreatitis which was likely the catalyst for developing DKA.

An ultrasound scan of his abdomen confirmed findings of pancreatic inflammation and importantly ruled out any other concurrent disease process.

His blood glucose was carefully monitored with spot tests done several times a day. Once he was rehydrated and his blood potassium was normalised he was started on insulin therapy. He received a constant infusion of intravenous insulin until his DKA was resolved before transitioning to injections given under the skin.

Once stable, Hamish received a general anaesthetic so that we could place a feeding tube through his neck and into his oesophagus. This was because he was not eating well and  both DM and pancreatitis require good nutrition as a very important part of their management.

Hamish was very brave and was eventually discharged after 9 days of hospitalisation.

We have seen him subsequently for monitoring checks of his DM as this generally requires dose adjustments to suit each individual patient.

We are pleased to say that he now has stable DM, his family is coping very well with his insulin injections and he is back to his normal gentleman self.