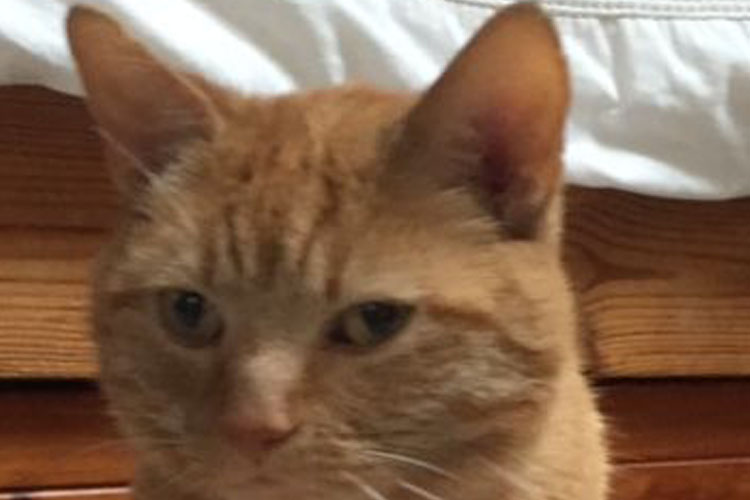 Marmalade is now a very happy cat, enjoying the sunshine and the attention from his owners. However a few weeks ago he came to see us as he had started to sound a bit like Darth Vader! He wasn’t eating and had very raspy and noisy breathing as well as a crusty brown discharge around his eyes, nose and mouth. On examination it was clear Marmalade was very unwell. He was dehydrated, had lost weight and had a very sore throat with a lot of extra noise associated with his breathing. Marmalade was admitted to the surgery for investigations as to why he was having these problems.

When a patient is dehydrated, it can be dangerous to rush in and sedate or anaesthetise them until they are more stable, so Marmalade was kept in overnight on fluids. By the morning his hydration had improved and he was feeling a little more comfortable. However, he still sounded like a famous Star Wars character! Therefore Marmalade was given an anaesthetic to enable us to examine his mouth and throat to try to find the cause. Nothing was found in his mouth or in the upper airways. However cats have a fleshy pocket on the roof of their mouths at the back of the throat which is created by the soft palate. This space communicates with the nasal passages. When we examined this area in Marmalade’s mouth we found there was a large bloody mass sitting firmly and blocking the area. Undoubtedly this would have been causing the abnormal breathing noise. We were concerned that Marmalade had a cancerous growth on the soft palate, but when the mass was removed it looked very much like a large blood clot. Its unusual fat slug like shape fitted perfectly into the area where it had been removed from. The mass was sent to the lab and thankfully the lab results confirmed it was only inflammatory tissue and a blood clot likely caused by trauma, rather than a cancerous growth. With the mass removed, Marmalade’s breathing returned to normal and he went home the same day. He’s been very pleased with himself since!

We do not know what caused the trauma to Marmalade, but we suspect it was something he either ate or inhaled. It is not uncommon for cats to eat blades of grass and get them stuck in this position as they thread their way up the nasal passages from the back of the mouth. I’m sure it was all a great adventure for Marmalade and he would tell a tall tale if he could.