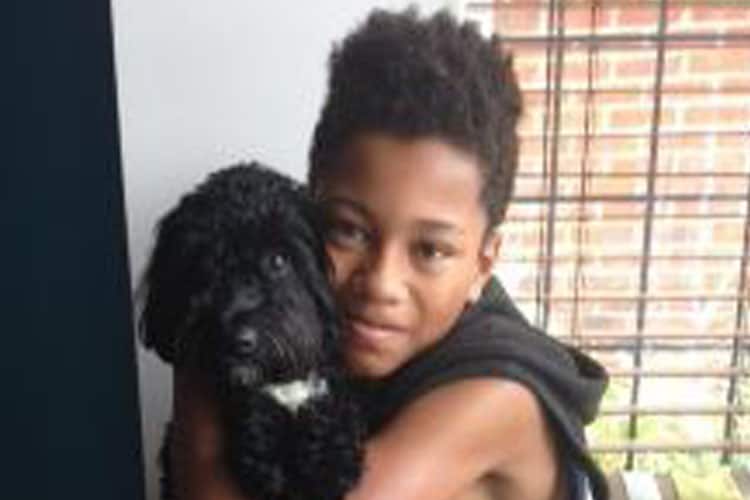 Being Brave and Resilient during a long stay in hospital

Molly, a 3 year old Cockerpoo, was rushed to us by her owner after she was attacked by two dogs while out on a walk. Understandably her owners were very shocked as was poor Molly.

Molly had suffered a large wound over her side which undoubtedly needed attention and our immediate concern was whether she also had other injuries we couldn’t see such as fractured ribs, a punctured lung or other internal injuries. Therefore, as soon as Molly was stabilised with intravenous fluids and pain relief, x-rays were taken to check for other ‘hidden’ injuries. Thankfully these were clear.

The wound on her chest, however, was extensive: a large flap of her skin had been pulled and was hanging off, exposing a deep wound underneath.

Assessing Molly’s wound it looked like it would fit neatly back together if we stitched it up there and then. However, we knew this was not the correct thing to do. Dogs’ mouths are full of bacteria and so severe infections can occur following a dog bite injury such as Molly’s. In addition, the blood supply to the affected area can be irreversibly damaged in such an injury meaning the skin or tissue will become necrotic and die back. There is no way to assess this instantly: time is needed to see how tissue will recover or not. Therefore, we had to wait before doing any surgery. If we stitched it back together again too soon and the skin did then become necrotic, there would be a big risk of Molly needing repeat, more complicated surgery once the flap died off.

This meant that, initially, we had to manage Molly’s injury as an open wound. Every day Molly needed to have the wound flushed with sterile fluid to get rid of all the bacteria and dying tissue, and fresh bandages placed. Despite being on continuous pain relief, this was a very painful process while the wound was so fresh and so Molly was sedated every time we needed to flush and redress her wound. Swabs were also taken of her wound and sent to the lab to be cultured so we knew she was on the correct antibiotics to fight the infection.

Over the course of a week the main flap of skin on Molly’s wound did indeed die back. This was to be expected. However, as the infection gradually cleared and the wound beneath the flap began to heal, the process of cleaning her wound and changing her dressing became much more comfortable for Molly and a week later she allowed us to do all this while she was awake. Many dogs would have lost their patience with us but Molly bravely soldiered on.

Nursing Molly was essential for her recovery. She is a lovely dog and very tolerant but wasn’t keen to eat while in hospital. All patients who stay in hospital have their food and water measured and, when a patient is not eating, a plan is made. In Molly’s case it was essential she ate – she needed more calories than normal to help her with the wound healing. So Molly was syringe fed by the nurses and tempted with lots of foods to get her eating again. Her owners also visited every day to try to cheer her up and encourage her to keep strong.

Nine days after she was first admitted to hospital, we now knew that Molly’s wound would not get any worse as the necrotic tissue had died back and the tissue below was trying to heal. The options for Molly were to continue managing her wound as an open wound or to take her to surgery and now try to close the wound for her. While we knew the wound would ultimately heal on its own we also knew that being left open would expose it to further damage and infection and it would have taken a very long time to heal.

Therefore it was decided surgery was the best option for Molly.  Closing a large wound can be difficult and so the vet team thought long and hard about the best way to close Molly’s wound. Thankfully Molly underwent a successful surgery that brought all the edges of the wound together.

Two days after her surgery Molly was finally well enough to go home.  10 days later she had her stitches out and was given the all clear!

In the end Molly spent 11 days in hospital with us. Everyone at Maven thought Molly was an amazingly brave and delightful patient, and although we all fell in love with her, we do hope for her sake she doesn’t need any more long stays with us in the future!