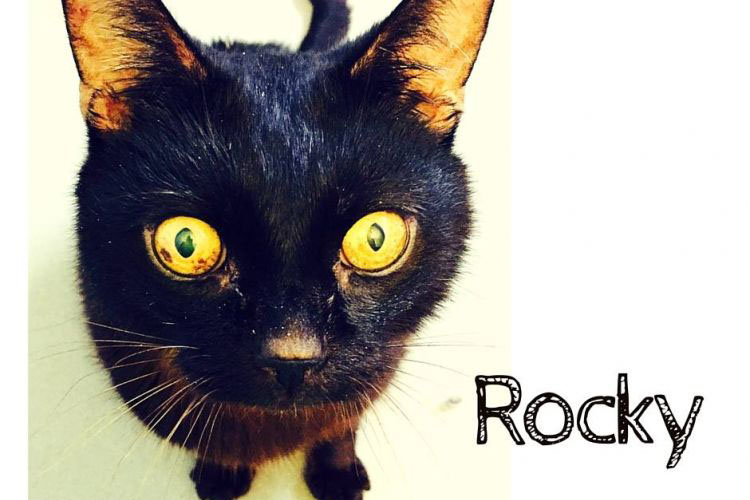 Being a gem of a cat, dealing with several conditions at once

At 14 and a half Rocky is an older gentleman now. Despite his age, he remains such a wonderful chap, full of character in his little face.

As a younger cat Rocky suffered from intestinal problems which resulted in him being started on low dose steroids. While these helped with his symptoms they can also increase appetite and Rocky gradually gained weight over the years. He had regular check ups with the vets and the steroids were reduce to the minimum dose to help with his intestines. Despite this his weight gain continued until he weighed 8kg, nearly 2-3kgs heavier than his ideal weight. By this time his intestinal symptoms had settled and we were able to stop his steroids. His owners also enrolled him in the Nurse Weight Loss Club to help reduce his weight using a carefully planned programme of calorie control and exercise. The plan for each pet is different and is individually calculated to allow for safe weight loss as losing weight too quickly can be a problem. Initially things were going well but careful monitoring showed Rocky was losing weight quicker than expected and also began drinking more. So in early 2015 Rocky saw the vet again and this time a blood sample showed Rocky had diabetes, a hormonal condition common in overweight pets.

It takes a lot of dedication from owners to control diabetes in cats and dogs as they often need twice a day injections of insulin as well as regular check ups with the vet and blood tests. However, Rocky’s owners persevered and the diabetes came under control. During this time Rocky had the misfortune of also developing pancreatitis. This is a common problem which can develop when a patient has diabetes. It can be very painful and often causes vomiting. Thankfully Rocky responded well to treatment.

Despite his diabetes and pancreatitis being controlled and his weight loss continuing at a much steadier pace, Rocky still wasn’t his normal self. Further blood tests and an ultrasound exam revealed Rocky also has a tumour on one of his adrenal glands. This produces excessive amounts of a hormone called aldosterone, causing high blood pressure. In addition he was becoming increasingly stiff and joint problems were also diagnosed. Further medications were started for both of these and, again, Rocky responded well.

Throughout all of this Rocky has been a diamond to work with. His regular visits here mean that everyone at Maven has grown very attached to him.

You’ll be please to know Rocky is currently doing very well, having insulin twice daily for his diabetes, blood pressure tablets and anti-inflammatory medications for his joints. He also remains on a diet to help stabilise his diabetes and also to try to reduce the weight on his joints and has done fantastically well, currently weighing a more modest 6.2kg.

You would think this would be enough for any cat. However Rocky’s plight doesn’t stop there!

Rocky’s hormonal conditions mean he has very thin skin and, in mid December last year he somehow managed to catch the skin in his side. In most cats this may have resulted in a small scratch or tear in the skin. However, in Rocky the result was that a very large wound opened up on his side: his skin was so thin it tore like paper.

As it is so thin, stitching Rocky’s  skin to close the wound was not an option- it would have torn through again. Therefore we had to manage his wound as an open wound.  The wound has been healing for the last six weeks and is still going – the going is slow but he will get there! Poor old Rocky. While we love seeing him, once his wound has fully healed we hope not to see him again too soon!