Vinnie – A gentle giant that will forever remain in our hearts.

Vinnie, was a seven and half year old Rottweiler when he came to see us in January 2020 for being stiff and uncomfortable. After a thorough clinical examination, we took some radiographs of his legs and this showed us that his discomfort was coming from his joints. Whilst osteoarthritis is not uncommon, it was noticed that several of his joints had suddenly become affected at the same time and there was also an increase in fluid within these joints. The joint fluid was sampled and sent to our laboratory for analysis. This gave us a diagnosis of immune mediate polyarthritis (IMPA). 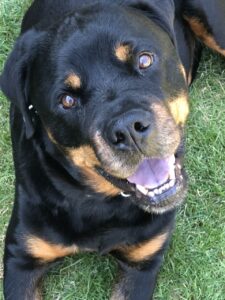 IMPA is a condition where the body’s own immune system mounts an inappropriate inflammatory reaction which target the joints. The joints become swollen, hot and painful. The diagnosis is made based on the presence of a large number of inflammatory cells in more than one joint at the same time and in the absence of an infectious cause.

Vinnie had to be hospitalised for a few days to manage his discomfort and for nursing care. He was started on corticosteroids which is an immune-suppressive medication and would stop his immune system from continuing its attack on his joints.

While he was in the hospital, he responded well to the corticosteroids as far as his IMPA was concerned, however, he developed severe haemorrhagic diarrhoea. Corticosteroids can cause intestinal ulceration and also stop the intestines from healing. Managing his condition was therefore tricky. 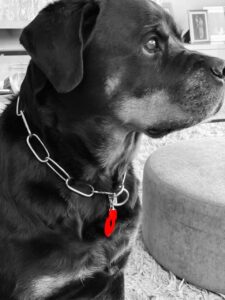 We had to find the right balance between minimising the side effects of the medication but also controlling the IMPA. A combination of immune-suppressive medications had to be used to allow lower doses of each to be given. Overtime the medication also caused him to lose muscle mass and affected the condition of his skin and coat.

To monitor his condition we had to perform regular blood tests to measure something called C-reactive protein. Vinnie would bark loudly every time he was called in for his check and blood test. He had that deep guttural bark that sounds scary and belied the fact he was one of the friendliest dogs one could meet.

Sadly, Vinnie was put to sleep recently as he was getting weak and developed a neurological illness.

This has been a challenging year for all of us, and Vinnie’s attitude and loving nature all through his illness is a lesson for us all.