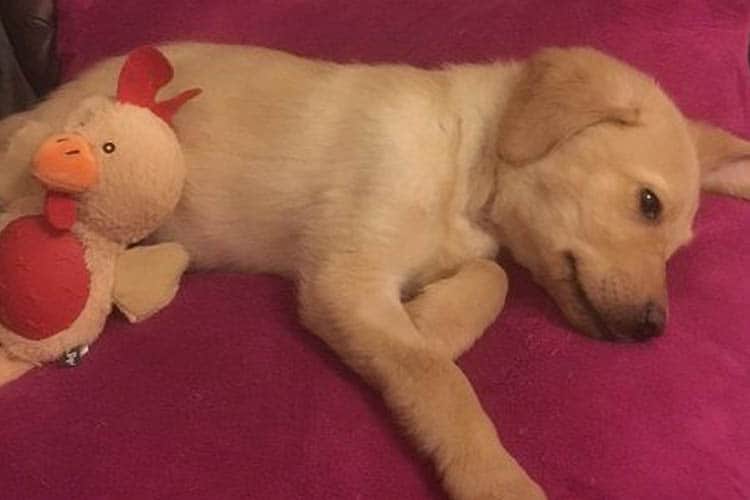 Reason for Nomination: Surviving against the odds!

Lolly had a very upsetting start to life. She came to see us only two days after being with her new family as she wasn’t feeling well. She had diarrhoea, had vomited several times and was not eating and playful like a normal puppy should be. As puppies are small they can become dehydrated very quickly which means even a small amount of diarrhoea or vomiting can be very severe for them. Lolly’s new owners had done the right thing to bring her straight down to us.

When we examined Lolly we were concerned that she was very flat in the consult room and was also still trying to be sick. She was immediately admitted for supportive care and investigations into why she was so unwell. Our concerns were whether she could have an obstruction of some description or whether she had an infection causing severe gastroenteritis. Lolly was placed on a drip and a blood sample was collected to check her organ function. An ultrasound of her abdomen was also performed to image the digestive tract and internal organs. The ultrasound did not show any blockage and so we began treatment for gastroenteritis. As well as her intravenous fluids, Lolly was started on antibiotics and anti-sickness medication to stabilise her and stop her from being sick.

Unfortunately, despite the intensive treatment she was receiving, Lolly remained very flat. She also continued to have horrible diarrhoea. Though Lolly had had her first vaccination, we were concerned she could be suffering from Parvovirus. Parvovirus is a very nasty infection which can cause horrendous diarrhoea and can be fatal. Puppies will have some immunity from their mother when they are first born, but it is vitally important that they receive their full vaccine course, which can start from 7weeks of age to help protect them against fatal diseases like Parvovirus. We wanted to confirm if Lolly did have this or if she had any other infection in her intestines which could be making her so unwell. The best way to test this was to send a sample of her faeces for analysis.

When Lolly had been admitted she had been placed in our isolation unit. This is an area of the hospital reserved for sick pets who may have infectious diseases (infections that can be passed to other animals or people) or who are not fully vaccinated and may be at risk of catching infectious diseases. In Lolly’s case we were concerned she fell in to both categories! As Lolly was so ill she did not want to move much or interact with us but we gave Lolly a cuddly toy to curl up to and keep her company which she seemed to appreciate. We also gave her intensive nursing, trying to tempt her to eat and keeping her clean as well as giving her all of her medications.

When Lolly’s faecal results came back we discovered that Lolly had contracted Campylobacter, a bacterium which is often associated with food poisoning and which can be transferred to people as well as other animals. She also had a high reading for parvovirus which meant this was also likely. Lolly was already on two types of antibiotics, but we added another antibiotic into her treatment, specifically to treat the campylobacter. (Campylobacter is only treatable by certain types of antibiotics). Unfortunately there is not specific treatment for parvovirus other than intensive supportive care which Lolly was being given.

With two severe infections affecting her intestines, they were quite damaged. She also wasn’t eating. As with most illnesses it is very important that the body receives nutrients to provide energy for healing. We decided to give Lolly a plasma transfusion to further help support and stabilise her. A plasma transfusion is similar to a blood transfusion but without the red blood cells. It contains proteins and nutrients the body needs to stay healthy. This gave Lolly a huge boost!

We were delighted when Lolly finally began to show small signs of improvement! She began taking the syringe feeding we were giving her and slowly but surely she began to feel stronger. Her playful nature materialised and she started keeping us on our toes!

In the end Lolly was hospitalised with us for a total of 10days which is an unusually long period of time. However, we were thrilled when she was finally able to go home as there were several days during her illness when we were not sure she would pull through. We became quite attached to little Lolly when she was here and our night team from Vets Now Emergency also missed her too when she was gone. It is testament to her owners’ dedication and the intensive care she received in hospital that Lolly pulled through and she seems to be going from strength to strength, finally enjoying life as a playful puppy.