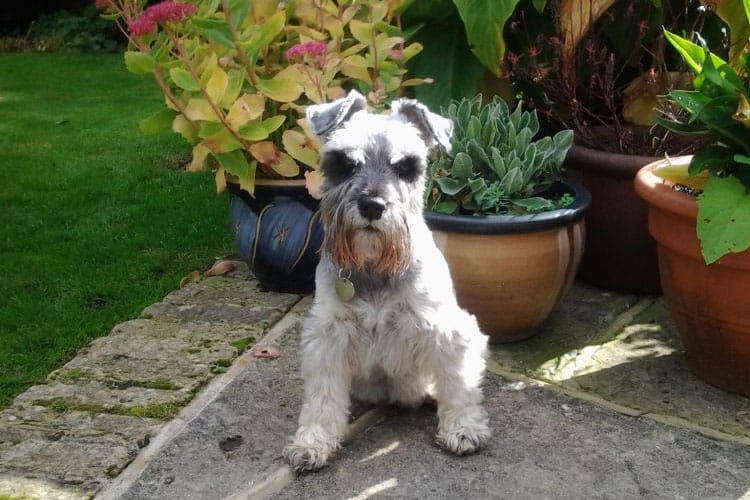 Binny is a beautiful 9 year old miniature schnauzer who still, despite the trials and tribulations she has faced over the years, looks and behaves very much like a young puppy.

At a young age Binny was diagnosed with lungworm. Lungworm can be picked up from slugs and snails and can cause internal bleeding. In some cases it can be fatal. Thankfully Binny made a full recovery.

Two years later, Binny presented with a confusing history of neck stretching and agitation. In an attempt to find out what was going on she had blood tests and an ultrasound scan. There was a concern Binny may have a porto-systemic shunt which is a condition where a blood vessel directs blood away from the liver directly into the main circulation. In this condition toxins that are normally processed by the liver accumulate in the blood and can cause strange behaviours including head pressing – this could certainly explain what was going on with Binny.

To further investigate if this was what was happening Binny went to the Animal Health Trust in Newmarket for an MRI scan. Interestingly the MRI ruled out a porto-systemic shunt and so Binny had liver biopsies to further investigate her condition. It was confirmed that she had a primary liver condition meaning her liver is not working as well as it should. She is being treated on a long term basis with liver support medication and additional medication as needed. Thankfully Binny responds well to treatment, and is also very good at telling us when things ‘just aren’t quite right’.

Not content with this complicated history, Binny also recently developed diabetes mellitus. This is a condition when the body is unable to regulate sugar levels in the blood leading to increased thirst, urination and appetite. Again, Binny has been a real trouper and taken well to her owner giving her twice daily injections of insulin to help reduce her blood sugar levels!

Binny is an absolute delight to treat and always runs in to great us with a wag of her tail and a spring in her step. Her owners refer to her as their “million pound hound”, but we know she’s been worth every penny!