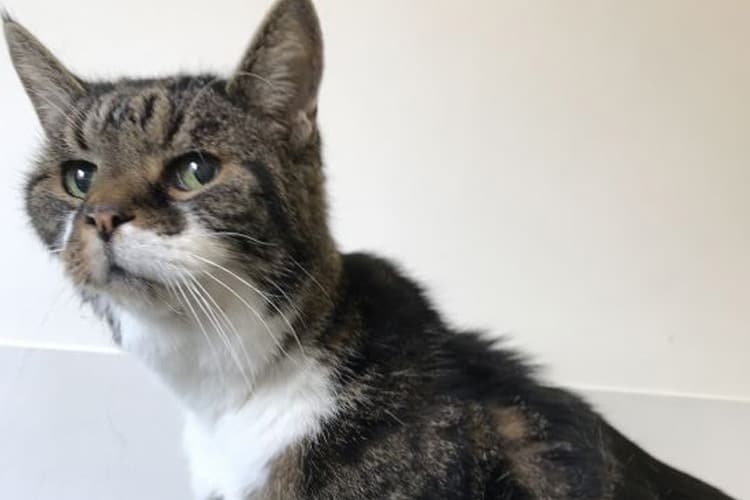 Three emergencies in 8 months – Wallace Duffy is a regular at Maven!

Wallace is an Eighteen and a half year old very well loved pussy cat. He has become a bit of a regular with us over the last year or so with various illnesses. Wallace doesn’t do anything by halves. Prior to February this year we had only really seen Wallace for routine annual booster vaccinations and a couple of dental treatments. However, since February we have pretty much seen him every month!

Wallace presented as an emergency one Sunday in February having been suspected of being hit by a car. He had a sore tail and hips and was very grumpy! Blood tests revealed the main reason for his grumpiness was an over-active thyroid gland. Wallace improve with pain relief and was started on treatment for his hyperthyroidism. He bounced back from this with no fear, and continued on the pain relief for suspected arthritis (he was 18 after all!) and thyroid treatment.

In March Wallace came in again as an emergency late one evening as he became suddenly lethargic, inappetant, with a high temperature. A physical examination revealed that he had an abscess on his lower back. Blood results also showed he had a severe Leukopaenia (very low white cell count), likely caused by the abscess, which made him ill enough to warrant a 4 day hospital stay.

April was a good month for Wallace as we only saw him once!! This was a routine check on his thyroid treatment. Routine checks continued for the next four months until Wallace could think of another reason to visit us as an emergency. In September, he presented again and this time he really worried us. He had been missing for 3 days and was found unable to stand, very wet and cold. When the nurses triaged him his temperature was only 35.5C (normal temperature for cats is between 38.0C-39.0C) He was not the Wallace we all remembered, he was very quiet and unresponsive. We advised his human carers that the prognosis for Wallace at this stage was quite poor, given his age and the condition he presented in.

However, Wallace wasn’t going down without a fight, he made a remarkable recovery within the first few hours of being with us after receiving intensive nursing care, oxygen, pain relief, fluid therapy and most importantly some hot water bottles to snuggle up against; his temperature soon returned to normal and his character started to show again. We could tell his back legs were seriously injured and after performing x rays of his lower back and hips we could see the full extent of his injuries.

Unfortunately, the x-rays revealed that Wallace had a fractured pelvis. He must have sustained some intense trauma to split his pelvis as it was fractured in 5 different places! A difficult conversation had to be had with Wallace’s owners as to what the most appropriate course of action was at this stage. Most 18year old cats would not be ideal candidates for multiple fracture repair surgeries and a prolonged recovery period. However, Wallace is not ‘most cats’ and his owners were committed to giving him every chance to succeed.

Once Wallace was stable enough to transfer to the referral clinic the owners took him and there he received surgery for his multiple fractures. He stayed with them for aggressive rehabilitation and physiotherapy for 2 weeks before being discharged for his therapy to continue at home. Wallace is still trying to walk in a straight line but shows much determination in his efforts.