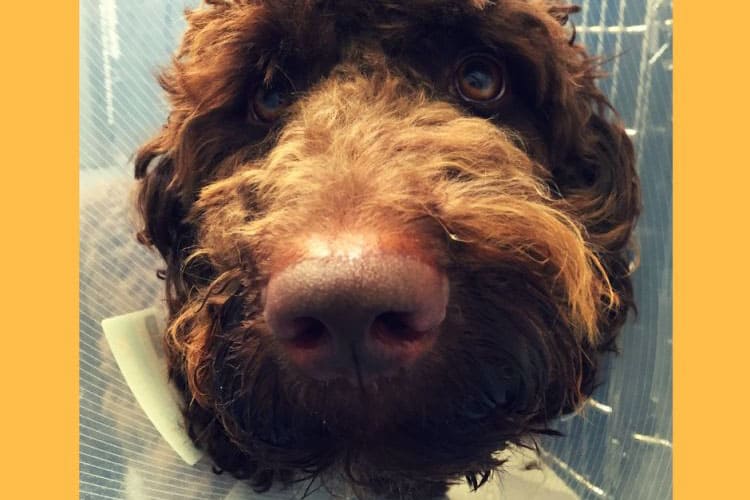 Overcoming Serious Illness while his family were away!

Dougal is a one-year-old Labradoodle who’s one of the sweetest boys you will ever meet. In the last month we’ve got to know him really well as he’s been incredibly unwell.

He came in to see us in late August as he had been vomiting and was feeling really sorry for himself. A blood test done on the day was normal but as he was so unwell in himself we carried out an ultrasound his abdomen. This showed that his intestines had ruptured and intestinal content was leaking into his abdomen: this is extremely serious. Our vets Chris and Michael look him straight to theatre and found that he had an ulcerated caecum (the part of the intestines between his small and large intestines). Due to the ulceration, the wall of the caecum had burst which was causing the problem. The surgery was complicated but we eventually were able to remove the abnormal intestine and repair things well.

Dougal’s road to recovery was long and difficult and it took almost a week of carefully nursing and TLC for him to feel well enough to eat on his own. Through an incredible team effort, we managed him through this tough time and we’re so pleased to say that he’s now home and well.

To make things even worse for his family, Dougal managed to fall unwell while they were away on holiday! He had lots of support, however, as his grandparents visited him every day and helped us greatly with his recovery. We hope he has no more misadventures the next time his family go away!