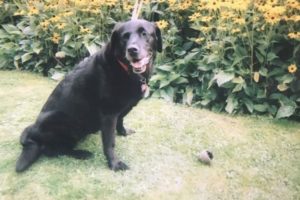 Overcoming a serious illness in her older years

Ellie has been to see us recently as she got a little overexcited and managed to eat a whole chicken! This caused her to have diarrhoea for several days and when she came to see us she was dehydrated and depressed with a sore abdomen. Tests revealed she had developed pancreatitis, meaning inflammation of the pancreas, an organ which sits behind the stomach and is involved in producing enzymes for digestion. This can be overworked with large fatty meals, or meals that the patient is not used to. Pancreatitis can be a very serious and painful condition. Poor Ellie was indeed very sick and as she is also 14 years old she was quite stiff and weak on her legs initially. A discussion was had as to whether Ellie would be able to recover from this ordeal or not. However, Ellie’s owner decided she was going to give her the best chance and start treatment.

Ellie is actually a retired Guide Dog and was originally trained as a young puppy 14 years ago. Having become an amazing Guide Dog Ellie then worked until she was 10 when it came time for her to retire. When Guide Dogs retire their owners often have to give them up to take on a new dog who can continue to work. This must be very hard both on the owners and dogs. Happily for Ellie, her original owner, who had trained her as a guide dog puppy, was happy to have her back and so Ellie went from home to home, ready to enjoy her retirement. Generally, she has been very well in the years since, other than becoming a bit stiff.

With Ellie now in hospital and suffering from Pancreatitis, Ellie’s mum was understandably very worried. Having initially seen our emergency vets overnight, Ellie was transferred to our care and received blood tests, x rays, an ultrasound by our visiting European specialist, intensive nursing and medical treatment.

It took six days of hospitalisation with intensive care and a total of two weeks of treatment before Ellie could be signed off. This may seem a long time but was actually a fantastic recovery given how sick she was. Being a Labrador probably helped her appetite pick up quickly. Her faeces gradually became more normal and she started to move about easier. She was happy being back home and getting her strength back. Ellie continues to do well with a low fat diet to help prevent future flare ups of pancreatitis and her joint support supplements for her joints. What an amazing journey this lovely girl been on.