A gentle giant tabby cat called Arnie came to see us in August with acute onset vomiting. He had been sick multiple times in 24 hours, and the vomit had become blood-tinged. He was really not himself, and did not want to eat or drink, so Arnie’s owners brought him straight down for an appointment.  During his clinical examination, he was found to be dehydrated, depressed and very sore in his tummy. Dr Hazel Maw was worried about the dehydration and how sore he was, so she admitted Arnie to our hospital for further tests and supportive treatment. 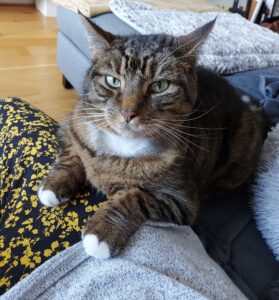 Once admitted, Arnie was brave while he had his blood taken and then placed onto intravenous fluids before being settled into our cat ward and started on medication. His blood tests revealed elevations in some types of white blood cells, which shows inflammation, but is not specific for where that inflammation is. Arnie had a further test to investigate his condition, an abdominal ultrasound scan. The ultrasound showed inflammation of his pancreas and duodenum (the first part of the small intestine that exits the stomach).

Arnie was treated supportively for pancreatitis. He received intravenous fluids to correct the dehydration, pain relief to make him more comfortable and anti-emetics to stop any further vomiting. He showed some initial signs of improvement; he stopped vomiting and was more comfortable. However after 24 hours poor Arnie deteriorated. He developed a high fever, and started vomiting large volumes of fluid. We repeated the ultrasound scan and took some x-rays of his abdomen. Arnie’s stomach and duodenum were now very dilated and full of fluid. The fluid contents of the duodenum were moving the wrong way back into his stomach rather than going forward into the rest of the intestines. This was consistent with a blockage in the small intestine; however, we could not see a specific cause for this. 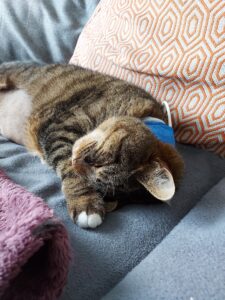 We recommended exploratory surgery to determine the cause of the obstruction. This is a major surgical procedure, which involves going into the abdomen to examine the stomach and intestines, and making an incision into these to remove any material causing the blockage.  In some cases, if the intestines are very damaged, a section of the gut may need to be removed completely. There is a risk of breakdown of the internal stitches and leaking of intestinal contents into the abdomen, which can lead to sepsis. However, without surgery, the fluid build-up would just continue to get worse.

Arnie’s dedicated owners agreed for him to have surgery and we found that Arnie had a large furbull wedged inside his duodenum. In most cats, furballs remain in the stomach and are vomited back up, so do not cause an issue. However, once the furball has moved out of the stomach and into the small intestine, it can get stuck and cause a blockage, which is what had happened to poor Arnie.

Luckily for Arnie we were able to remove the furball from the small intestine without having to remove a large section of gut. We placed a feeding tube into his oesophagus (food pipe) via his neck at the same time as surgery, so we would be able to maintain his nutrition during his recovery period.

Arnie required intensive nursing treatment after his surgery. He recovered very well and within 3 days he had started to eat for himself and was comfortable in his tummy. He was able to go home to continue recovery with his family, where he went from strength to strength, getting food both via the tube and increasingly by himself. After a week, the feeding tube was removed, and after another 2 weeks, he was fully signed off.

Arnie was such a sweet boy to look after; although he was very nervous during his time in hospital, he soldiered through everything and never complained. We are so happy that he made a complete recovery after such a big surgery, and that he is back to his normal happy self!