Harlyn, a 10-year-old Labrador, presented to our out-of-hours emergency team Vets Now in the early hours of the morning after an acute episode of vomiting and appearing very lethargic. Her initial physical examination showed that she was dehydrated, weak, sore on her abdomen and had a high temperature. Harlyn continued to become weaker and she was admitted to our hospital and transferred to Maven for investigations to begin immediately to find the problem. 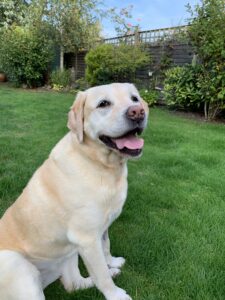 Initially, supportive treatment was started by placing her onto intravenous fluids, administering her pain relief and taking preliminary blood samples. Next, an ultrasound scan of her abdomen was performed which showed a small amount of free fluid around a single loop of the small intestine. This piece of intestine had an abnormal ultrasonographic appearance and there was concern that this may mean part of her intestinal content was leaking into her abdomen. A small needle sample was taken very carefully of this fluid and our team had a look at what cells were present, using our hospital microscope.

Unfortunately for Harlyn, there were numerous nasty white blood cells and free bacteria present. This indicated she had a ruptured small intestine. This had caused a septic peritonitis, which is an infection within the abdomen itself and if not rapidly treated will prove fatal.

Dr. Tom Bacon was very concerned about Harlyn as she began to show signs of septicaemia/septic shock. With consent from Harlyn’s owners, she was rushed into surgery to investigate why her small intestine had ruptured. This can be due to multiple conditions including foreign bodies getting stuck or piercing through the intestinal wall, severe inflammation and cancer.

The major abdominal surgery performed is called an exploratory laparotomy and requires the support of multiple team members. After inspecting her entire abdomen, the source of the leak was found caused by a small 1-2cm tumour affecting the wall of her small intestine which had burst. An intricate surgery was performed to remove over 15cm of the affected small intestine, called an enterectomy with an end-to-end anastomosis. Larger surgical margins were needed to try to remove any remaining cancerous cells in her intestine. Over 7L of sterile fluid was then used to wash out all the bacteria and intestinal content from her abdomen to prevent a recurrence of her septic peritonitis.

After having life-saving surgery, Harlyn then spent 9 days recovering in our hospital needing intensive nursing care. This included daily blood tests and repeat ultrasounds, pain relief, intravenous antibiotics, intravenous fluids and anti-nausea medication. Thankfully, her surgical wound showed no evidence of breakdown, which is a risk with any intestinal surgery. She was very brave and started eating by herself and looked much happier as she recovered. Her owners were thrilled to have her home after spending so long away.

Harlyn’s tumour was sent to our external laboratory for analysis which would also tell us if any further treatments were needed. In Harlyn’s case, we were concerned about a Mast Cell Tumour as she previously had one removed from her ear earlier that year. After multiple tests at the lab, Harlyn was diagnosed with an Intestinal T-Cell Lymphoma which had been fully removed. 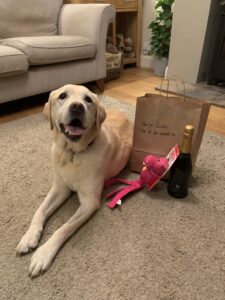 Harlyn’s tumour was a rare finding as it was very much localised to her intestine with no visible spread to any other organs. Lymphoma can occur in any organ and given its ability to affect multiple organs the decision was made to start Harlyn on metronomic chemotherapy. This is when a chemotherapy drug is given at a consistent, low dose to try and kill/stop any further tumour cells from spreading or causing disease. For Harlyn, this is via tablets at home which she is taking very well.

Harlyn continues to do well post-surgery and is back to her normal, waggy-tailed, lovely self and is showing no side effects to her medication. We are so happy to see that Harlyn is doing well after her near-fatal condition and is still pleased to see us for her regular check ups!