Cassie, a 14-year-old Golden Retriever came to see us in May 2021.  She is a very healthy girl who does struggle with arthritis in her old age – however, this is being well controlled with pain relief and joint supplements. 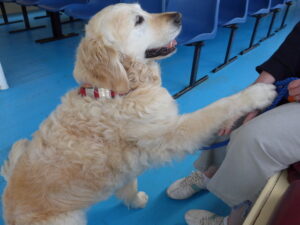 On the morning of her visit to us, she had been unable to get up as normal from her bed, and when she tried to get up, she collapsed and fell again.  Cassie had also vomited overnight and showed no interest in breakfast at all, which is very unlike her!  Her owners were concerned that she was having issues with her balance system as she had experienced a similar, although a milder version of the same problem last year.

During her appointment, the Vet Surgeon, Hazel Maw performed a full clinical examination which revealed a marked head-tilt, rapid flickering eye movements from side to side and confirmed that she was indeed unable to keep herself upright.  Her other vital signs; her heart, breathing and temperature, were still within the normal range and she was even giving us a wag of her tail for good measure! 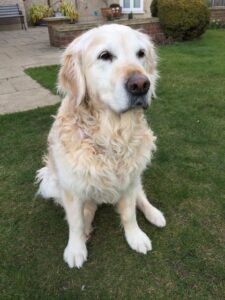 Our presumptive diagnosis was Vestibular Disease.  This is a sudden onset syndrome that commonly affects older dogs and sometimes has underlying causes such as middle or inner ear infections, trauma, tumours, toxins and thyroid disease.  In the absence of these causes for Cassie, we felt her disease was idiopathic.  This means that no specific treatment was available or even needed, however, Cassie was admitted to the hospital as nursing a 34kg recumbent dog is a real challenge and her owners were committed to giving her the best care possible.

Once she was admitted to our hospital she was started on intravenous fluids to ensure she did not become dehydrated, anti-nausea medication to prevent her feeling queasy and pain-relief for her arthritis. We took some blood from Cassie to run tests on our in house laboratory machines which revealed a good profile of general health, so at this stage, her treatment plan was formed. 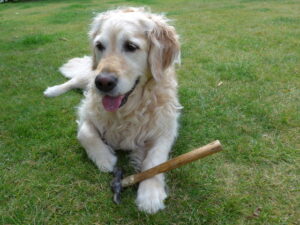 Cassie received intensive nursing care from our team during her stay. She was hand-fed as her coordination and balance were not adequate for her to feed herself – she developed a fondness for cooked chicken during this time and we couldn’t possibly refuse those sad eyes! Cassie also needed to be turned and repositioned frequently to prevent pressure sores developing on her limbs. Two staff members were needed to take her to the toilet, they supported her by using a sling underneath her tummy to help her walk and go to the toilet normally.

Cassie spent 6 days in our hospital. Her balance and mobility continued to slowly improve and were finally at the stage where she could be discharged home.  The dedication of her owners over the next few weeks was crucial to ensuring her full recovery as she still required a fair amount of TLC at home!  Cassie is still going strong at 14 and a half years old and we look forward to seeing her for her annual vaccination at the end of August.