Magnus, a handsome 5-year-old Russian Blue cross, came to see vet, Dr Amy Jordan, in April this year. His owner reported that he has seemed off-colour for the previous week or so, and had not been eating as much as usual.

At his visit, Amy performed a full clinical exam and her findings were largely unremarkable, however, she did notice that his right kidney felt enlarged and was sore when palpated. Amy advised some further investigations.

A blood test was performed on our in-house machines. This showed that Magnus had severe elevations of his kidney parameters, urea and creatinine. In fact, the levels were so high that they were unreadable on the machine. Amy was very worried about Magnus and recommended that he was immediately admitted to the hospital for further investigations and treatment.

Magnus was initially treated with intravenous fluid therapy when he was admitted and settled into our cat ward for his overnight stay. 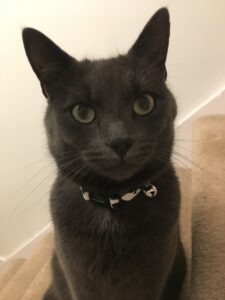 The next day, an abdominal ultrasound scan showed that his left kidney was small and irregular, and his right kidney was very enlarged, with dilation of the ureter (the tube that connects the kidney to the bladder). This finding was very suggestive of an obstruction to the right ureter, together with pre-existing chronic degenerative changes to the left kidney. The obstruction was most likely caused by a tiny stone, but may also have been due to a stricture, or narrowing of the ureter. Sadly, the obstruction of the right ureter, combined with the end-stage appearance of the left kidney, meant that Magnus had a guarded prognosis.

Ureteral obstruction can sometimes be managed with high rates of intravenous fluid therapy, to help flush any stones or debris through into the bladder. Magnus stayed in hospital receiving intravenous fluids for a few days, but unfortunately, the obstruction did not pass, and he began to develop free fluid inside his abdomen. We were concerned that there could be urine leaking from his obstructed ureter, so we discussed the possibility of surgery with his owners to bypass the obstruction. 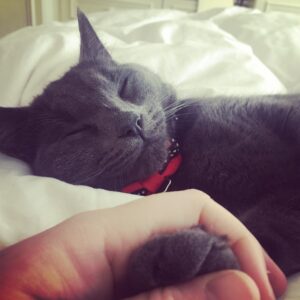 Morrice performed surgery to place a SUB (subcutaneous ureteral bypass) device. This is an advanced procedure and involves inserting a special sterile tube into the kidney, leading to the bladder, essentially replacing the function of the obstructed ureter. The SUB is connected to a port just beneath the skin so that it can be flushed with sterile saline periodically to remove any build-up of debris and ensure that it is still functional.

Magnus received intensive nursing care in hospital for 5 days after his surgery and started to make slow improvements with his kidney parameters. He started to eat small amounts with some TLC from our wonderful nurses and was eventually discharged home.

Magnus’s prognosis still remains guarded, due to his pre-existing kidney disease, however, his dedicated owners have been taking fantastic care of him and he is currently doing well at home.