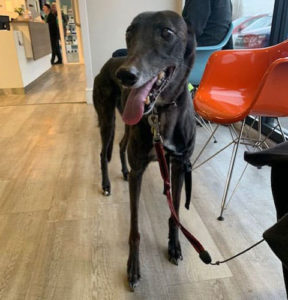 At the beginning of 2019, Molly a 10 ½ year old Greyhound had already accumulated a number of medical conditions; but nothing could have prepared her or her family for the rest of the year to come. Molly has previously suffered from pancreatitis which involves ongoing dietary management, as well as an under-active thyroid gland that also involves daily medication. Not unlike other elderly greyhounds, she has a bit of arthritis too.

Molly started the year off with dental treatments which involved 5 teeth being removed due to decay. She also had a lump in her mouth removed, which turned out to be a benign plasma cell tumour, this was thankfully removed in full. Molly then had a third anaesthetic later in the year for suturing a wound, so she was a frequent flyer with us!

August is normally a lovely month to be wondering around the parks enjoying a sniff in the sunshine. However, Molly’s owners brought her to see us as she had become quite wobbly on her legs and needed assistance to walk. She was not able to place her feet flat on the ground normally and as a result was dragging her feet causing problems. On examination we identified that Molly had a neurological condition, in addition to her pre-existing arthritis.

After a night of nursing care at Maven, we referred Molly to specialists for further imaging. An MRI scan along with various other tests revealed that Molly had had an ischaemic cerebrovascular accident (CVA). This means a small bleed occurred in a part of her brain that is responsible for coordination. She was also suffering from high blood pressure. Thankfully for Molly she has a very supportive family and if it weren’t for their round the clock nursing care and the medical treatment she received she would not have made such an amazing recovery.

During her wobbly episodes Molly caused her leg to be grazed. In most patients this wouldn’t be too much of an issue but greyhounds have very thin skin and little flesh, so a graze like this for her was quite serious. She needed constant nursing care and dressing changes and it took a long time for poor Molly to get back to normal. Thankfully by Christmas Molly was doing well and walking with little assistance. We hope this new year brings some better luck for this beautiful girl and her family.