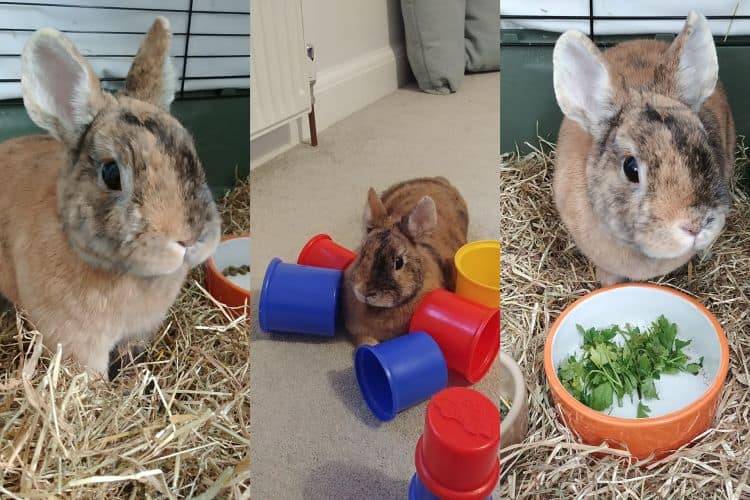 Luna is a two-year-old bunny who has been to see us more times than he can cares to think about! Luna has always suffered from impactions. This is a common problem in rabbits and occurs when the guts stop moving food along which causes a large amount of food (ingesta) to build up within the stomach or intestines, resulting in a blockage. When this happens rabbits often stop passing faeces and stop eating which can then make them very weak. Sometimes if fluid and gas build up in front of the blockage, as rabbits cannot vomit, the stomach can become very bloated and can in severe cases rupture.

Luckily for Luna his owners are very vigilant and are very aware of Luna’s symptoms. Whenever he starts to show a problem they bring him into see us and he has always been treated quickly and successfully.

Treatment for an impaction involves a number of different factors:

The cause of impaction in rabbits is normally related to other illnesses, such as dental disease, or any illness causing pain or inappetance. For Luna the problem is his hips. X-rays revealed Luna has malformed back legs which is likely the source of his pain. Adrenaline release caused by the discomfort will negatively affect the motility of the guts and cause them to slow down leading to impactions. Like a lot of rabbits, Luna also has teeth which do not wear down evenly. As rabbits’ teeth continue to grow throughout their lives they should be worn down by chewing and grinding on hay and other roughage. This is why plenty of roughage in the diet is important. The molars do not always sit correctly and as a consequence the edges of the teeth do not wear down and form sharp spurs which can injure the tongue or cheek. This is what happens with Luna and so he requires regular dental treatment, along with long term pain relief medication for his back legs.

Since starting him on the pain medication and burring down his teeth regularly Luna has not needed to be hospitalised again for treatment for an impaction. We keep our fingers crossed this continues and his owners remain very vigilant!

Luna enjoys playing with his favourite coloured cups and chilling out in his bed. He is a very special little bunny and we look forward to seeing him for his next dental treatment.