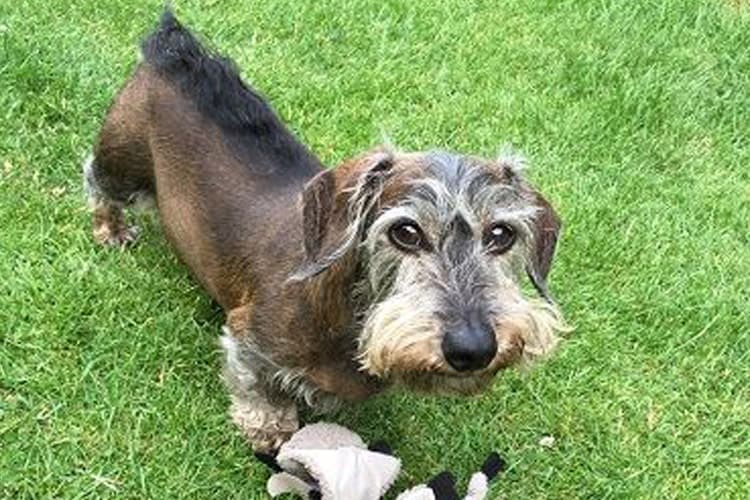 Reason for Nomination: Having coped so well with multiple anaesthetics for full mouth dental extractions!

Frankie is an 8 year old wire-haired Miniature Dachshund who started sneezing blood and pus quite violently one weekend. On examination we could see that his left upper canine tooth was severely infected, and we suspected the infection had caused an oro-nasal fistula. An oro-nasal fistula is when (an abnormal!) link between the tooth root and nasal passage forms when infection has caused breakdown of the bone that normally separated the areas. It appeared that Frankie also had dental disease on other teeth, so a dental was recommended to remove the infected canine and clean and polish and possible extractions of the rest of the teeth.

Unfortunately, Frankie was also under investigations for periods of collapse and a severe heart murmur at the time. Frankie needed a general anaesthetic to help with his teeth, but we felt it was safest to investigate his heart disease first. A heart scan showed that Frankie did indeed have heart disease, but that despite the severity of the sound of the murmur, with medication to support his heart a general anaesthetic could be performed. However, the biggest risk to Frankie would be the length of the anaesthetic performed so great care would need to be taken to minimise the length of the anaesthetic.

Once we were comfortable with the stability of Frankie’s heart on the new medication, he was admitted for the day to have his dental. We knew that a few extractions were likely but it wasn’t until he was anaesthetised that the true extend of the dental disease could be seen. Each dental we perform begins with charting all the teeth; we inspect the amount of tartar, the severity of gingivitis (inflamed gums) and how deep any holes or pockets in the gum may be. We also perform x-rays of the teeth to assess for tooth disease below the gum line that may not be visible. Unfortunately for Frankie he had barely any healthy teeth and most of his molars and canines were horribly infected. It is amazing that Frankie had not showed signs before he started sneezing blood and pus, to indicate how bad his teeth were. Even we were surprised to discover how severe the teeth were and recommended full mouth extractions. However, we were aware this would take several hours, putting Frankie’s heart under strain. Therefore, it was decided, along with Frankie’s Owner that we would stage his dental work into several separate dentals and each one should last no longer than 3 hours to put minimal pressure on his heart.

During the first dental Frankie had the most badly affected teeth removed, about 19 teeth (including the canine with the oro-nasal fistula) before we had to stop.

Frankie recovered well from his first dental, but still had over 20 teeth remaining that needed removing. Frankie has been such a brave boy each time he has come in for subsequent dentals and has also been a wonderful boy at home taking his antibiotics and pain relief. Each dental means less teeth for Frankie, but a step closer to a healthy mouth and no further anaesthetics and risk to his heart as he gets older.