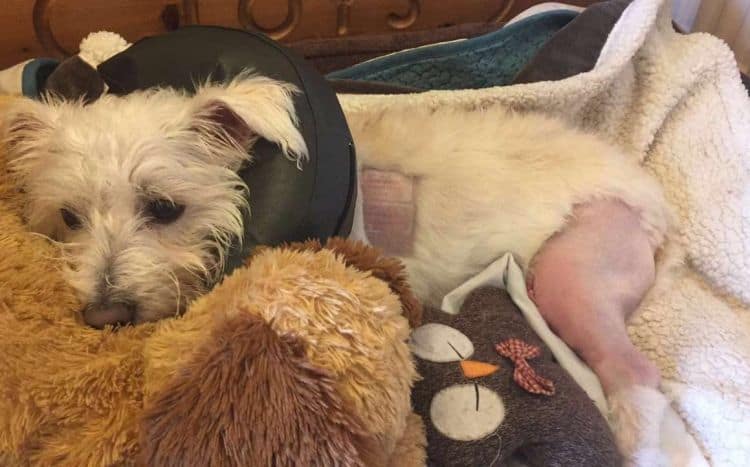 Bilateral bravery: Having two knee surgeries in a few weeks!

Baygle is a wonderful little dog who has been having problems on her back legs since late last year. She was getting stiff and sore and, unfortunately, pain relief and rest were just not enough to keep her comfy.
Therefore, in January of this year we decided to assess Baygle further. To do this, she required x-rays of her back legs, taken under general anaesthetic. The anaesthetic allowed us to position Baygle correctly for the x-rays we needed but also allowed us to examine her legs with no tension – something which can given valuable information.
X-rays were taken of her knees and of her hips. They were mostly normal apart from a small amount of swelling in her left knee. However, both of her knees also felt stable when assessed under the anaesthetic. Therefore, at that point we decided to continue to rest her in the hope that she would improve with a plan to x-ray again if she worsened.
Unfortunately six weeks later she had indeed become worse and was struggling on her back legs. We again took x-rays. This time her knees were abnormal and the amount of inflammation in her left knee was more significant. As well as the changes on her x-rays her left knee was now unstable when palpated under the anaesthetic. Her right knee was also now showing signs of disease.
Baygle’s diagnosis was cruciate ligament disease in both her knees.
Cruciate ligament disease is a common condition seen in dogs. The cruciate ligament stabilises the knee. When the ligament is ruptured, the knee will ‘slide’ each time it bears weight. Trauma to the equivalent ligament in humans is common, where damage most often occurs during some form of sport. The nature of the injury is very different in dogs. Rather than the ligament suddenly breaking due to excessive trauma, it usually degenerates slowly over time, rather like a fraying rope. This important difference is the primary reason why the treatment options recommended for cruciate ligament injury in dogs are so different from the treatment options recommended for humans.
Given Baygle’s deterioration and x-ray findings now, it was decided that she would need surgery in both legs, one to follow the other 8 weeks later. Baygle is a small dog and, historically, surgical options to repair a ruptured cruciate in smaller dogs were limited to simpler procedures. While these procedures did work they could result in a slow recovery and more arthritis long term. However, now, with the development of better surgeries and smaller metal implants, vets are now able to improve the surgeries offered for cruciate repair in our smaller best friends.
In March Baygle had an operation called an MMP TTA on her left knee and in June she had the same procedure on her right knee. An MMP TTA involves cutting the bone of the shin and bringing the bone forward with titanium metal implants. This procedure prevents the ‘slide’ experienced with a ruptured cruciate and, therefore, stabilises the joint.
With great happiness we are able to now say that Baygle is as good as ever and has improved daily. She has one final set of x-rays to go before we give her the all clear and we expect no complications from here!