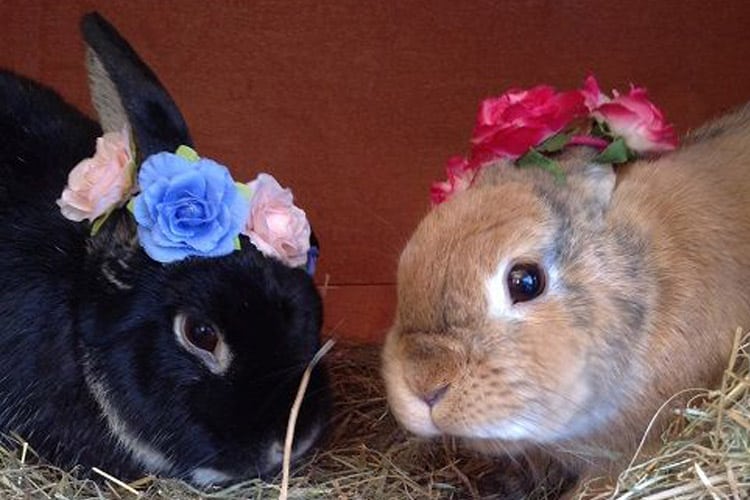 Reason for Nomination: Bouncing along through his treatment!

Bob the bunny has been a regular visitor with us recently. Happily, we have just signed him off, free to hop about with his best friend Penny who has been holding his paw throughout his entire journey! Bob has been a model patient and, while we are all sad to no longer see him every week, we are also very glad he is able to be his normal self at home.

Bob’s journey began when his owners noticed he was limping. He came straight to us for an examination and was started on pain relief. Though Bob didn’t seem too sore initially, his limping didn’t improve and so after a few more days he came back. As he hadn’t improved, we sedated him for x-rays. The x-rays revealed a dislocation of his hock joint, meaning the ligaments holding the joint together were damaged and loose. Bob’s foot was therefore slightly floppy and ever so slightly out-turned and he could not use it to hop about on. Fixation of this sort of injury is tricky in any species and more so for Bob as his bones are so small which meant any surgery would be very difficult. However, surgery was discussed to fuse the joint to allow function. There was a concern that the surgery may not work and that this could lead to amputation. While it sounds extreme, amputation was also discussed as an initial option as it would alleviate Bob’s discomfort. However, after discussion we decided to try a splint on his leg to see if the joint would heal with time if it was kept perfectly still. We knew if not that amputation would likely be required.

During Bob’s treatment he needed to come in weekly for dressing changes under sedation. Any rabbit having an anaesthetic or sedation is at risk of developing ileus as their guts are very sensitive to changes. Ileus is a condition where the guts stop moving food along and can be very serious. Initially Bob did develop ileus but was successfully treated with some gut stimulant medications. We then kept him on these and he was in and out for each treatment without any more tummy upsets.

As Bob was spending a lot of time away from home – half a day with us once a week, we had to be mindful of his strong relationship with his best friend Penny. Rabbits generally live in pairs as they are very sociable and form a strong bond with their companion. So each week Penny would come in with Bob! Penny is slightly larger than Bob and was always his protector, stamping her feet whenever we took him away and grooming him straight away when he was awake enough to go back with her. Penny did get a manicure for her role in keeping Bob company through his visits.

Bob now has no dressing and is hopping about again with Penny. We are hoping with the aid of some physiotherapy he will gain some movement back in the joint. However as long as he is pain free and able to use the leg everyone is happy.