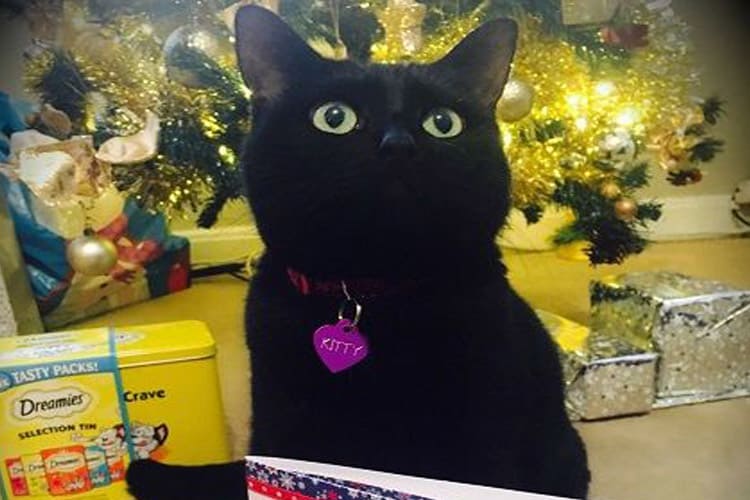 Reason for Nomination: Fighting against the Odds

Kitty, has always been a brave patient at Maven, and was diagnosed with Feline Asthma a couple of years ago. She uses an inhaler and had been stable for a long time. Her owner brought her in for a check-up after she seemed to have an ear irritation and had developed a head tilt. After initial treatment for an ear infection, she seemed to improve. Sadly, she then deteriorated; Kitty was struggling to walk and was not eating well.  Bizarrely, her head tilt had come back, but was to the other side than before. She had also developed a runny nose and seemed quite poorly.

When Kitty was examined, the vet noticed that as well as her head tilt, runny nose and wobbly walking, she had a condition called Horner’s syndrome in her right eye; the pupil was smaller than the other eye, the eye was sunken and her third eyelid was visible on that left eye.

We were concerned that Kitty had a problem in her inner ear; perhaps a deep infection, a polyp (benign growth), or, most concerning, a tumour. Kitty was referred for advanced imaging (a CT scan) of her head and neck. Unfortunately, the CT confirmed our fears; a mass was discovered at the very back of her nose and her nasopharynx (connection between the nose and mouth). Biopsies were taken of the mass via endoscopy, and these showed that the mass was a form of cancer called Lymphoma. Chest x-rays and an ultrasound scan of her abdomen proved that the lymphoma was confined for her nasal passage.

Nasal lymphoma in cats can be treated in two ways; with chemotherapy or radiation therapy. Together, Kitty’s owners and the vets decided that for Kitty, chemotherapy would be the best option. This involved Kitty coming in weekly to begin with for chemotherapy injections and tablets. She also needed blood tests to ensure she was well enough for the treatment. Kitty was as good as gold for her treatment and was very relaxed for each visit. Initially, she responded very well; her runny nose improved and she was having no difficulties walking and her head tilt improved.

Unfortunately, one side effect of chemotherapy can be reductions in white and red blood cell numbers. Kitty became poorly after one round of chemo, going off her food and seeming not her usual self. A blood test confirmed that this was because her white blood cells had become dangerously low. Kitty needed hospitalisation, and after a few day of intravenous antibiotics, she was well enough to go home.

Kitty’s owners have decided that although Kitty has been very brave, it is not kind to her to continue treatment with chemotherapy if it makes her poorly and she cannot be at home. Together, they and the vets are working out what is the best way forward for Kitty and how to give her the best quality of life. We hope that the chemotherapy that she was able to have will have shrunk the tumour enough that she can continue to enjoy a comfortable life. We wish her a happy Christmas with her fantastic owners, who have shown true dedication and love to their wonderful girl.