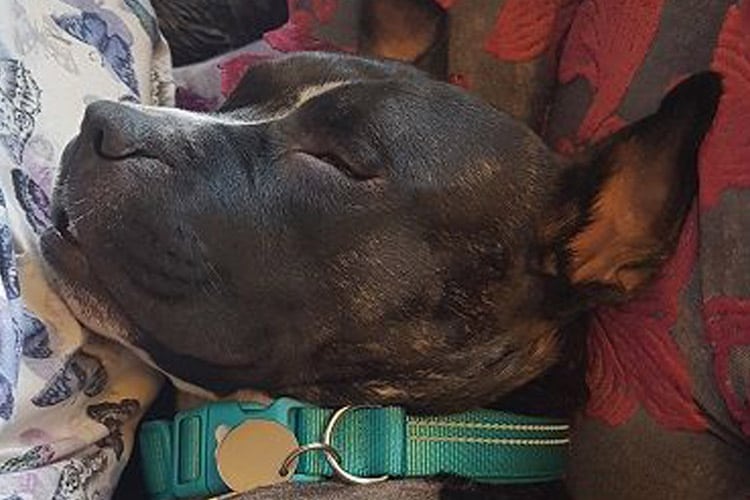 Being so happy despite some really bad luck

Pepper arrived to her forever home in spring 2018 from Battersea dogs and cats home at 2 years of age. She quickly found her feet with her new mum, becoming part of the family. Pepper has had quite an unfortunate turn of events in her first 6 months with her new family, having had to have 5 operations, x rays, three ultrasounds and two different types of aggressive tumours removed, the last of which resulted in her losing her leg. Pepper and her owner have been amazing throughout, always happy to come in to see us and Pepper’s tail never stops wagging! She is one of the happiest dogs I know! For these reasons, we felt Pepper deserved to become our first pet of the month for 2019!

For Pepper it all began with a swelling on her toe which continued to grow. Initially a needle aspirate sample was taken to ascertain whether it needed removing or whether it was an infection which would reduce with medication. Unfortunately, the results confirmed a cancerous process and a tissue biopsy was performed to ascertain the type of cancer as some types need a larger area of normal tissue removing around them than others. In Pepper’s case the decision was whether to just remove the lump or to remove the whole toe that the lump was on. For these reasons biopsies are an important part of staging cancer removal.

Pepper did end up losing her toe as a soft tissue sarcoma was diagnosed which can be very aggressive and can spread throughout adjacent tissues rapidly. The results of the toe amputation confirmed all the tumour cells had been removed which was fantastic news. To go through all this is traumatic enough for everyone involved, however the upsetting news for Pepper was we found another lump higher up the same leg at the time of her final surgery. This went through the stages of needle aspiration and biopsy which resulted in another type of aggressive cancer being diagnosed. This was completely unrelated to the first type and was a high grade Mast cell tumour. The worrying factor with these tumours is they can spread internally to other organs such as the liver and spleen therefore just removing the lump is sometimes not the answer and systemic chemotherapy is the best option. Pepper underwent an ultrasound by a European specialist in imaging who found a very small nodule in her spleen. It was too small to sample and the specialist was fairly confident it was a benign nodule not a spread of her cancer. He could find no other signs of spread in her internal organs therefore Pepper came in again for major surgery.

In order to remove the appropriate margin around the tumour we needed to take some healthy tissue too. Unfortunately, Pepper’s tumour was very close to one of her major veins and nerves in her leg and these needed to be cut during the surgery. For this reason, sadly, we needed to amputate Pepper’s leg. This was not a decision we made lightly. It took Pepper a couple of weeks to adjust to her new mobility but once she did she was full of beans again. Pepper had a follow up ultrasound recently to re-assess her spleen and she got the all clear! The nodule had not grown which gives us evidence to say this is not cancerous spread. We are happy to see Pepper is back with her family and she can enjoy the new year to come without the need to visit us every five minutes!