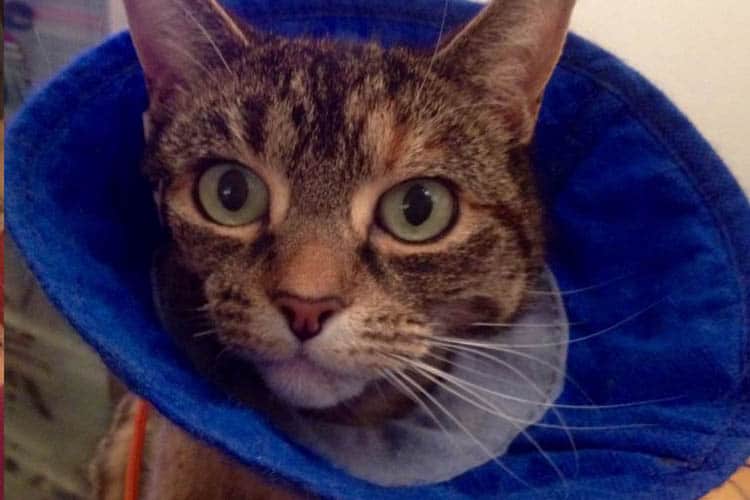 Being so affectionate despite having a horrible wound

Little Coco is usually the most affectionate and loving cat. However, just over a month ago now we received a call from her distressed mum, who reported that Coco had been missing for a few days and when she finally returned home she was hiding in the shed and looked scared and in pain. She did not want to be caught but her parents eventually managed to coax her out and brought her in to see us at Maven Veterinary Care.

Coco had a large abscess on the right hand side of her face. We suspect this was caused following a fight with another cat. Some cat abscesses will resolve on their own with antibiotics and pain relief but unfortunately Coco’s abscess was so large that we knew she would need more treatment than that. She was admitted for urgent pain relief and antibiotics and was settled into the hospital for a general anaesthetic the following morning to evaluate and treat the abscess. Coco immediately became a favourite among the Maven team as, despite what was most definitely a very painful condition, she was very trusting of us and of the opinion that we should be spending all day making a fuss of her!

When Coco had her abscess treated the following day we had to lance and debride it and in doing so Coco was left with a large skin defect across her cheek measuring 3.5cm by 5.5cm! There is very little spare skin on the face which meant we couldn’t close this space by bringing the edges together as we normally would. We realised that Coco would need reconstructive surgery to help close the wound. However, we couldn’t do this straight away as the wound was too fresh and needed to begin creating its own healing surface before this process. Instead we had to stitch a dressing over the wound – this was the only way to keep a dressing on in such a location!

Each day Coco had her dressing changed until, on the third day, the wound looked healthy to allow reconstructive surgery to close the defect.

A flap of skin slightly larger than the wound on the face was harvested from the neck. This flap was twisted around to be placed and sutured to close the face wound. The neck has plenty of loose skin which allows a flap as large as this to be collected and still be able to easily close the wound now created on the neck.

Coco recovered very well from the surgery. She remained in hospital for a few days as we were more concerned she would not be able to keep still if she went home!

Two weeks after the surgery it was noticed that the very front part of the flap had become infected. Coco therefore needed a repeat surgery to clean up the infection as antibiotics are unfortunately insufficient for this task.

So it has been a long road to recovery for this brave girl but she is now doing very well and she has remained so loving and friendly throughout.