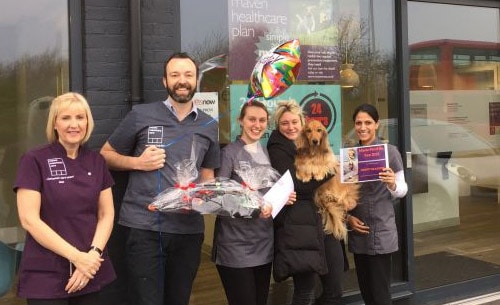 The gorgeous 2 year old Dachshund captured the hearts of voters during the fiercely fought competition in December 2016. Monty had been Pet of the Month in July 2016 having been treated at Maven Vets when a corn on the cob he had eaten became stuck in his intestines requiring surgery.

His friendly nature and bravery during his ordeal made him a firm favourite with the team at Maven and we are delighted to see him now chosen to be Pet of the Year.

Monty’s mum, Hannah said, ‘I was at a loss when Monty was so unwell and had to be admitted to the surgery. It was such a difficult time and I am so grateful to the team at Maven for looking after Monty so well and keeping me up to date at every stage. I’m delighted he has won the Pet of the Year and I’m looking forward to opening his goodie hamper of toys with him later! ’

Along with Monty’s hamper of goodies, Hannah was delighted to also be given a voucher for a meal at newly opened Memphis restaurant in North Cheam.

However, Monty has promised to eat no more human titbits – especially corn on the cob!