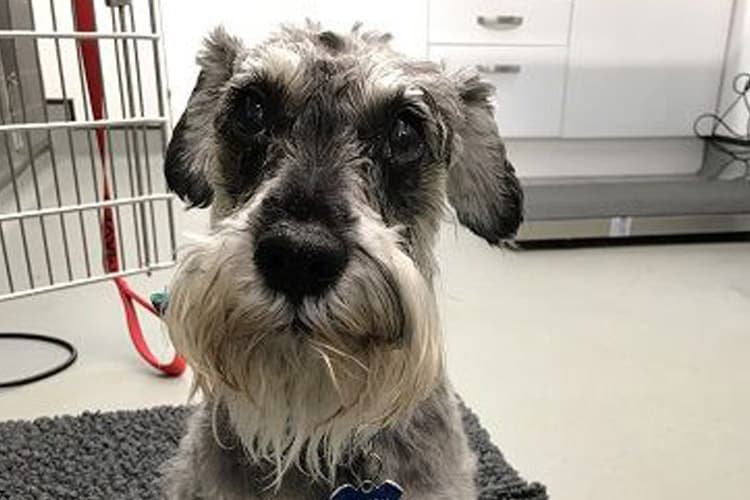 Enduring lots of different problems, all with a waggy tail.

This handsome chap has been in and out of the hospital for so many different problems in the last few months, but has borne it all with a waggy tail and without complaint, making him February’s Pet of the Month!

His problems first started in the summer, when he was brought into us after having nasty vomiting, and diarrhoea. His owner had also noticed that he had been much thirstier than normal and was losing weight. On examination, he was dehydrated and sore in his tummy. Monty had a prior history of pancreatitis, so we were worried he was experiencing another flare-up of this condition, which is unfortunately very common.  Blood and urine tests showed a very high sugar level consistent with diabetes. Similar to diabetes in people, this condition is caused by failure of the pancreas to produce insulin, which results in a dangerously high blood sugar level. Monty urgently needed to start treatment with insulin injections to bring this under control.  On top of this, Monty also had a nasty infection in his gall bladder, which was seen on his abdominal ultrasound scan. The gall bladder is found in the liver and is responsible for storing bile which is important for digestion. Sometimes bacteria can travel up from the gut into the gall bladder resulting in an infection.

Unfortunately, any infection makes diabetes even more difficult to manage as it interferes with the body’s ability to respond to insulin.  Poor Monty was given intravenous fluids, antibiotics and strong pain relief, but to resolve the problem he was going to need emergency surgery to remove his gall bladder, which removes the source of infection. He was referred to North Down’s Specialist Referrals for this, as this is a complicated procedure and needs specialist input. Happily, the procedure went very well, he recovered from surgery and was discharged home a few days later!

Monty was then back in the care of Maven to try and get his diabetes under control. This involves regular check-ups, and close monitoring of his blood sugar levels. The dose of insulin must be very slowly and carefully adjusted; too much insulin and his blood sugar can go dangerously low instead! Monty was doing very well and his blood sugar control was steadily improving, when around Christmastime he suddenly developed cataracts in both of his eyes. This is unfortunately a very common consequence of diabetes and can happen at any time after diagnosis. He had sadly gone completely blind. Monty was referred again to see a specialist ophthalmologist at North Downs, and had both of his cataracts removed surgically, which has completely restored his vision! He was discharged on a total of 7 different eye drops, but took all of these without complaint! He is so happy to be running about with his sister Sacha again.

Poor Monty’s journey is not over yet; he has been hospitalised with us again recently for a bout of gastroenteritis and his diabetes is proving tricky to control, but thanks to the dedication of his owners he is steadily getting back on his feet.  Monty has been an absolute star patient, and we hope that he continues to live life to the full.