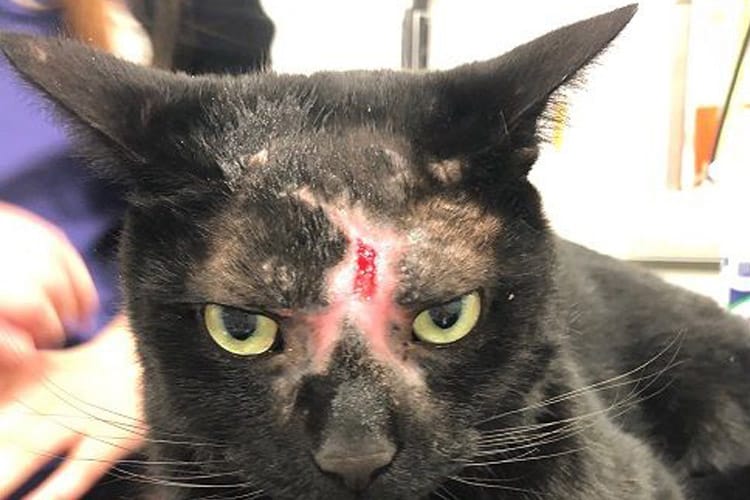 Reason for Nomination: Coping so well….with a hole in his head!

Loki is a young, male, domestic short haired cat who was initially seen with a slight swelling on his head. On examination it looked like a developing abscess, most likely form being bitten by another cat. This is a common problem that we see at Maven, as cats often get into scraps when fighting over territories. Usually, a simple course of antibiotics and pain relief, alongside expressing or lancing the abscess in a consult, is enough to heal the abscess.

Unfortunately, in Loki’s case, the initial treatment did not manage to halt the abscess. Instead, it continued to grow and began to ooze a very smelly discharge. It was causing poor Loki a lot of discomfort. Due to the severity of the abscess, the tissue on his head around it was becoming necrotic (dying) so the decision was made to remove the infected tissue under a general anaesthetic.

The dying tissue was cut away to leave fresh edges of normal tissue, and all the pus was cleaned and flushed away. An x-ray of the head was taken to ensure no unusual material (e.g. a nail or tooth) had been left by the attacking cat, but nothing could be seen to explain why poor Loki’s abscess had become so nasty. After the procedure Loki’s head was clean and healthy tissue could be seen, but, because the abscess had been so large, it wasn’t possible to close the wound. Instead the large wound would need to be managed as an open wound. Even if Loki’s wound had been smaller, it is likely we would have had to leave it to heal by itself because when infected wounds such as this are stitched closed they often break down and open up again due the infection present.

Poor Loki did look quite dramatic as the wound covered a large part of his head above his eye and he had to wear a buster collar to prevent him scratching at it. The wound needed regular cleaning as, for the first few days the discharge continued. Thankfully, with antibiotics and pain relief on board, as well as dedicated nursing and daily assessing and attending to the wound, Loki turned a corner and the wound began to heal.

Loki had to spend several days in hospital while we managed the wound, but once it was drier, and beginning to heal, Loki went home to continue his progress at home. Throughout his stay, Loki was an affectionate and delightful patient. He never got angry even when his sore head had to be cleaned and put up very well with the embarrassment of wearing a buster collar for so long!

The pictures you can see show how Loki progressed. He may be left with some scarring but we don’t think anything could spoil this handsome lad’s good looks! We hope he stays away from any more cat fights from now on!