Rudy, a 2 year old Main Coon, was presented to us in April 2020. He had non-specific signs of lethargy and reduced appetite initially. Over a few days his owners noted that he was drinking excessively and was licking his cat litter.

On physical examination we found that he had pale mucous membranes(gums), a heart murmur and a gallop heart rhythm, which is a heart beats sound like a galloping horse! The suspicion was of an anaemia, a drop in red blood cells, as the most likely cause for these symptoms.

Rudy was admitted to our hospital for stabilisation and diagnostic tests.

A blood test confirmed severe anaemia. Anaemia is a symptom and not a diagnosis. Several disease processes can cause anaemia. They can however, be split into 3 main reasons

His blood count was 4% whereas normal is >30%! He therefore needed an urgent blood transfusion. 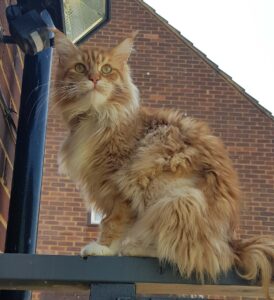 Unfortunately, we do not yet have a blood bank for cats (there is one for dogs). For this reason a donor is required. Cats also have blood types. Their main ones are called A, B and AB. An incompatible blood transfusion is a very serious and often fatal outcome in cats. For this reason Rudy’s blood was typed and we then had to find a suitable donor. The donor also has to meet specific criteria with regards age, weight and health status. A full general health blood screen is also performed on the donor as well as a blood count and blood typing. Fortunately, we were able to find a match later that same morning and gave Rudy his first successful transfusion.

We then started testing to identify a cause for the anaemia. We determined that there was no evidence of any toxin exposure and Rudy did not have a history of travel abroad. Urinalysis(testing his urine) was unremarkable. Ultrasound examination of the chest and abdomen was performed to look for any evidence of bleeding or a cause for red blood cell destruction (for example a tumour). The ultrasound of the heart showed structural change which could be explained by the anaemia but could also be caused by disease of the heart as a separate issue. We decided to monitor this. Radiographs of his lungs were unremarkable.

Blood was submitted to an external laboratory for testing against various 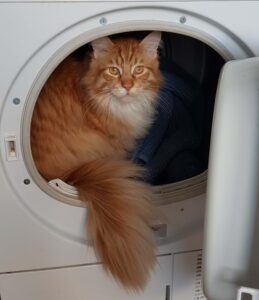 infectious diseases that can cause anaemia in cats or shut down the bone marrow. One of the organisms tested for is an organism called Mycoplasma hemofelis which can cause hemolytic (destructive) anaemia in cats.

All the tests for infectious diseases came back as negative.

By ruling out these other diseases, we had narrowed the diagnosis down to 2 possibilities considering he had a severe anaemia with no evidence of regeneration by the bone marrow:

Aplastic anaemia is associated with reduced counts of other cells produced by the bone marrow such as white blood cells and platelets. PIMA however, only affects red blood cells. A bone marrow biopsy would be required to definitively confirm the diagnosis. However, through process of elimination (other cell lines were fine) and as bone marrow biopsy is not without risk we settled on a diagnosis of PIMA.

PIMA is an uncommon form of immune mediated hemolytic anaemia (IMHA) targeting red blood cell precursors in the bone marrow. IMHA is a disease process where the body’s immune system no longer recognises the red blood cells as ‘self’ and starts to destroy them as though they were cells foreign to the body (like bacteria or viruses in the blood would be).

The treatment for PIMA/IMHA is immune suppressive medication to stop the immune system’s attack on the red blood cells.

In the case of PIMA the response to treatment can take several weeks. Rudy needed 3 further transfusions (using different donor cats each time) before his bone marrow kicked back in to action!

Immune suppressive medication can negatively affect the immune system’s ability to deal with environmental infections. Rudy did get a severe kidney infection about 1 month into his treatment which was successfully treated.

Rudy has been monitored very closely. Several visits, blood tests and careful medication alterations later he has finally come off his medication for PIMA in January 2021. There is a possibility he could relapse but for now he is doing fantastically well.

We have all grown attached to this lovely boy and are absolutely delighted to have seen him get better.