Margot is a 5 and a half-year-old Golden Retriever who came to see us initially in May 2020 for having a seizure. We thought at the time that this could be something called reactive seizures, which tend to be caused from ingested toxins or from other diseases outside of the brain, such as low blood glucose. After a full clinical examination and blood tests, we then ruled this out. We advised her owners to monitor her for the time being and to keep a diary if she had any more seizures. 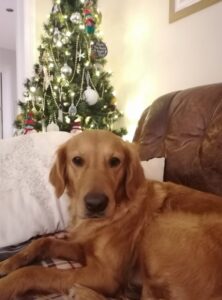 Unfortunately for Margot she had to come back to us in September 2020 as she was having ‘Cluster Seizures’, which is when patients have multiple seizures within a 24 hour period, and these can be more serious. At her appointment, Margot was very nervous but was otherwise very well in herself since the seizures. We noticed at this point that a few of her lymph nodes around her body were slightly enlarged and we took some biopsies of these using a needle while she was with us. Unfortunately for Margot, these samples came back with a diagnosis of Lymphoma.

Lymphoma is a type of cancer that most commonly, in dogs, affects the lymph nodes around the body. Lymphoma is caused by the abnormal production of a certain white blood cell called a lymphocyte. These can form in any lymph node and travel around the body. We were concerned at this point that Margot’s lymphoma may have spread to her brain causing her to have seizures. Margot was referred to a specialist to have an MRI scan of her brain and to have a sample taken from the fluid surrounding her brain and spinal cord. These tests showed that the lymphoma had not spread to her brain and meant that the cause for her seizures is from a disease called Idiopathic Epilepsy. 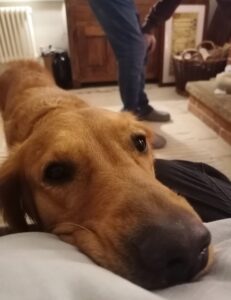 has no underlying cause. Given that Margot presented with a more severe form of epilepsy we started her on anti-seizure medication. This has controlled Margot’s seizures very well whilst we treat her lymphoma. Margot showed no clinical signs of lymphoma at the time of diagnosis so if it wasn’t for her seizure, this may not have been picked up until much later.

Thankfully for Margot, her type of lymphoma can respond very well to chemotherapy which we typically give for 6 months in these type of cases. She is currently having chemotherapy with us here at Maven and is in complete remission for her lymphoma. She is as bouncy as ever. Margot was very nervous of the vets before this, but since coming in weekly to see us for her chemotherapy, and for assessment of her epilepsy, she now loves a cuddle and will happily wag her tail for more fuss. We are very happy with Margot’s progress and love that she is no longer scared of the vets.