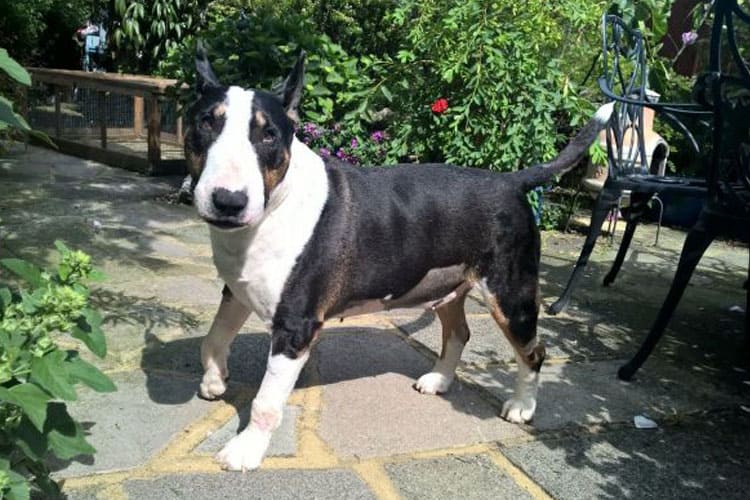 Reason for Nomination: Being a true gentleman throughout his recent treatment

Elvis is a nine-year-old Bull terrier who came in to see us at the end of May as he seemed a little bloated and had been having signs of an upset stomach for a little while. Whilst on the whole he looked well, having known Elvis for quite some time we knew that he wasn’t himself.

An abdominal ultrasound was performed and Elvis was found to have a very large and very abnormal spleen. Under the same sedation a needle biopsy of the spleen and a blood test were performed. Elvis went home whilst we waited for his results.

Unfortunately the biopsy showed Elvis to have lymphoma. This is a type of cancer. Usually once this cancer is in the spleen it means that it has spread to other organs and other areas around the body. If this were the case Elvis’ prognosis would not have been good and chemotherapy would have been our only treatment option.  We needed to know if the cancer had or hadn’t spread. To do this an additional specialist abdominal and heart scan was performed and chest x-rays taken. Thankfully they confirmed the lymphoma to only be in the spleen! Unfortunately the scan also showed that Elvis had eaten something he shouldn’t have as he had a foreign body lodged within his stomach!

Thankfully, the spleen is an organ in the abdomen that we are able to remove. Surgery was performed and Elvis’ spleen was removed and sent to the pathologist for further testing. As well as taking out his spleen we also removed the offending foreign body from his stomach: it was a velcro belt!

Both of the surgeries went very well and Elvis has since recovered nicely- in fact he is back to being himself and feels much better.

The good news continues as the pathologist has examined Elvis’ spleen and confirmed that the type of lymphoma Elvis had is restricted to the spleen and so unlikely to spread in the future. This means that Elvis will not need any further treatment. We will monitor him closely with follow-up checks and ultrasounds, but for the moment the news is very good indeed!