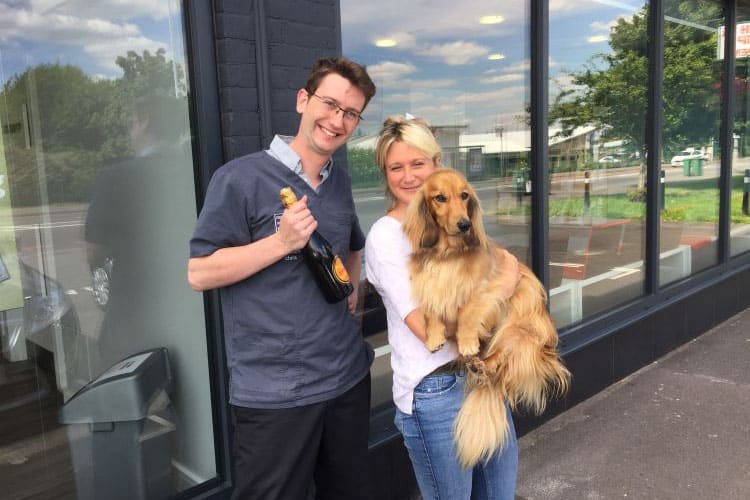 Monty first came into see us after having had a couple of days of intermittent vomiting and diarrhoea. He really didn’t seem his normal self, was depressed and lethargic and didn’t want to eat. When we examined Monty he was dehydrated but his temperature was normal and his abdomen felt comfortable.

Dogs can be depressed if they have eaten something which causes an upset stomach and often this will resolve with symptomatic treatment. However, as Monty was so lethargic we were a bit worried that this could be more serious. Monty’s owner also advised she had seen both him and his brother eating some corn on the cob over the weekend.  There is always a risk if animals have eaten something unusual like this that it can get stuck in their guts causing a blockage. Often these animals will present with vomiting and diarrhoea as Monty did. If the blockage isn’t removed it can be fatal.

Monty was admitted to hospital for some investigations. He had a blood test which showed signs of severe dehydration, raised white blood cells which indicates inflammation or infection and some of the electrolytes in his body where also low (which can happen with severe vomiting). Monty was immediately placed on a drip to rehydrate him, and some electrolytes added to this fluid. Monty then had some x-rays of his abdomen to see if there was anything abnormal and, in particular, if there was anything that could point towards an object being stuck. The x-rays did show quite a lot of gas in his intestines, but no obvious ‘foreign body’ was showing up. We decided to stabilise Monty on fluids and supportive care including pain relief and to monitor him closely.

The next morning Monty was still very poorly but much better hydrated due to his fluids. We decided to do some more imaging of Monty’s abdomen, this time with an ultrasound scan. The scan revealed that the gas in his abdomen wasn’t moving and there did appear to be something abnormal in his intestines which cold be a ‘foreign body’ stuck in there. Not all items will show on an x-ray which is why a second form of imaging such as an ultrasound scan can be very useful if we continue to be concerned about a possible foreign body.

Having completed the scan, Monty was taken to surgery as we were now convinced there was something stuck that needed removed.

Monty’s intestines were very inflamed and looked very painful- no wonder he felt so sad! Sure enough, on careful examination of his intestines we found something very firm and large stuck in his small intestine. It was very solid and was too wide to continue passing along his intestine. We surgically removed the object – which turned out to be the corn on the cob that Monty had sneakily eaten over the weekend!

Over the next few days Monty made amazing progress. Without the corn on the cob stuck in his intestines he felt much better. He began eating well and passing normal faeces again and his wound on his abdomen healed nicely. We were all delighted to see him improve and return to his normal happy self. We hope Monty has learnt his lesson and doesn’t eat anything silly again!