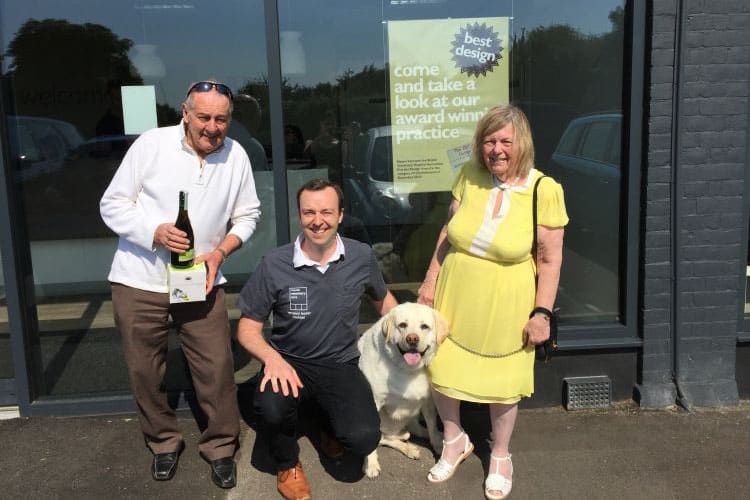 Reason for Nomination: Being a lovable happy chappy!

Buster is a big, lovable Labrador who is well known in our clinic. He is such a happy chap, no matter what he is in for and is a pleasure to see; Buster puts a smile on your face each and every time!

We’ve been looking after him for the past few years, mainly for arthritis in his right ankle. However, more recently Buster developed a lump on the right side of his body under the skin just behind his ribs. As with any lump we cannot tell what it is just by physical exam and so Buster had an ultrasound and needle biopsy of the lump. Thankfully the results showed that it was a benign fatty lump. These lumps usually are not surgically removed, as they will rarely cause problems. We will usually only remove a fatty lump if it gets so large to affect an animal’s quality of life or if it’s in a position that may cause the dog complications.

In Buster’s case his lump did grow very quickly and became the size and shape of a rugby ball. As it was so large Buster’s movement became restricted. The combination of the extra weight and his arthritis was making life difficult. For this reason the decision was made to surgically remove the mass.

Buster’s operation was in April. Surgery to remove something of this size is always complicated and takes time but in Buster’s case things all went very well. It is normal after removing such a large lump that the body produces fluid which will gather in the space where the lump has been. To manage this Buster stayed in hospital for five days after the surgery and we used a surgical drain to remove the fluid. The drain would collect the fluid as it gathered, preventing it causing problem with his wound. During this time Buster was incredibly patient – letting us empty the drain regularly and enjoying the fuss made of him by the staff.

It’s fair to say that whilst here we all fell in love with him!

The drain was removed at the end of the five days and Buster was able to return home to complete his healing – much to the relief of his owners! He has now completely healed and remains a firm favourite on his visits to see us.