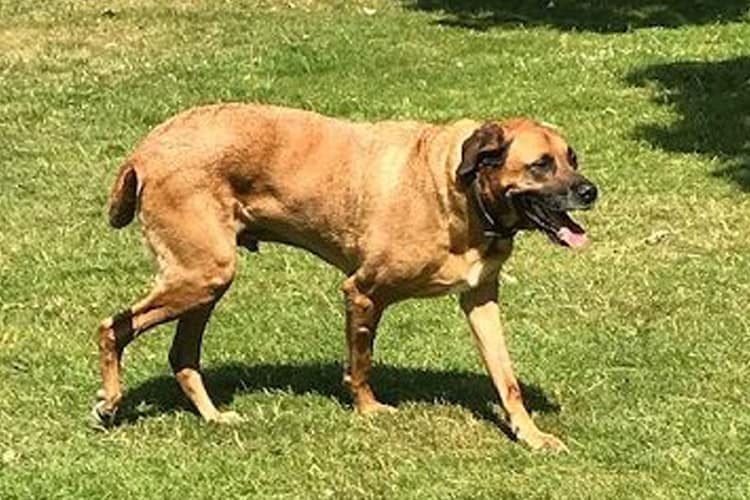 Getting the all-clear after life-saving surgery

Teddy is a 10-year-old Mastiff who was brought in as he was suddenly not himself; he was quiet, off food and had no energy. On examination, he had a slight temperature and something did not feel normal in his abdomen. He was admitted to the hospital for investigations, including a blood test and an ultrasound of his abdomen.

The blood test showed minimal changes, and were surprisingly good for an older boy. However, the ultrasound revealed the serious cause of why he had become so unwell so quickly. He had a mass on his spleen and there was free fluid within the abdomen. The fluid was sampled and proved to be blood. This meant that the mass on Teddy’s spleen had ruptured, and he was bleeding from the inside.

Ultrasound alone cannot tell us if the mass is a benign lesion or a cancerous one. Sometimes a cancerous mass will have spread to the lungs (metastases), which we can assess with chest x-rays, but even if these are clear, this does not mean we can say the mass is not neoplastic.

We explained to Teddy’s owners that the only way to save him was to perform surgery to remove his entire spleen, including the bleeding mass. The surgery is a big operation and an agonising decision to make; if the mass is cancerous, then even when the tumour is removed, the prognosis remains very poor, and some dogs do not live beyond an extra few weeks or months. On the other hand, if the mass is benign, the surgery will be curative. The concern was that Teddy’s chances of the mass being benign were poorer, as he is an older boy.

His owners wanted to fight for him, but were worried about putting him through a major surgery, especially if his chances of recovery were low. Together we decided to do the initial chest x-rays to determine if there was any cancerous spread. These were clear, so Teddy’s owners decided they could not give up on him yet and Teddy went to surgery.

Teddy’s surgery went well and the spleen was removed. There was no visible spread of the tumour to his other organs. He had lost a lot of blood during the surgery but thankfully his body coped well, and a blood transfusion was not needed. Teddy stayed in overnight to ensure he could have pain relief and be monitored, but was well enough to be discharged the following day. Over the next 2 weeks his wounds healed and Teddy took the whole thing in his stride. He seemed much more his normal, happy self. However, we and his owners waiting anxiously for news from the pathologists about whether the mass was cancerous or not.

We were delighted when the report came back with the fantastic news that the mass was benign. We could all finally relax that Teddy was in the all clear! Congratulations you wonderful boy!