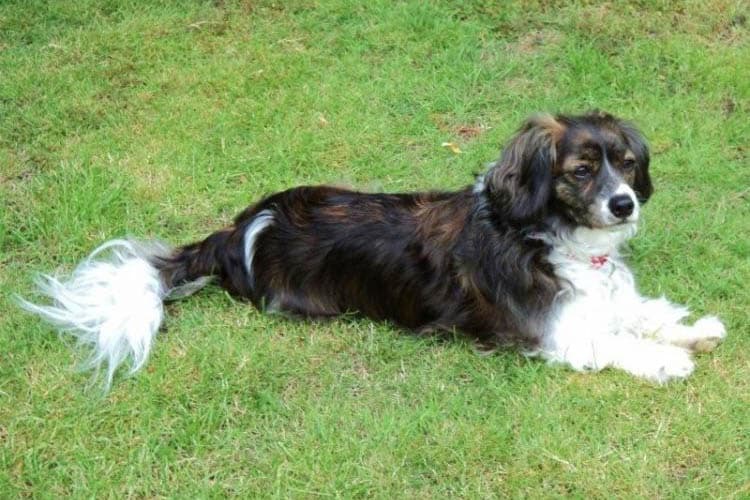 Evie’s troubles all began when she managed to get hold of some chocolate meant for her owners. Evie couldn’t resist eating the whole lot. Chocolate is toxic for dogs and, unfortunately, Evie had eaten over the toxic dose for her weight.  If we know a pet has eaten something toxic within 1-2 hours of them doing it, we can give them a treatment to make them sick which means they don’t absorb the toxin and won’t become unwell. Evie is very good at looking sweet and innocent and so managed to hide what she had been up to meaning it was over 2 hours before her owners realised what had happened. By this time it was too late to make her sick as the chocolate would no longer be in Evie’s stomach. Instead she had to be admitted for treatment against the toxic effects. She was placed on fluids and given medication to stop her feeling sick. Evie had a blood test to check if there had been any damage to her organs but no immediate toxic effect was evident. After an overnight stay in hospital Evie was allowed to go home and we all thought that would be the end of her ordeal… sadly for Evie, the worst was yet to come.

Two days after she was discharged Evie became very poorly. She wasn’t eating, was depressed and had been being sick. On examination she was dehydrated, had a temperature and her abdomen was extremely painful. Evie was admitted to hospital and given immediate pain relief and placed on fluids to relieve her symptoms. A blood test confirmed our suspicions- Evie had pancreatitis.

Often, in dogs, pancreatitis can be triggered by ingestion of a fatty meal. So although Evie suffered no initial toxic effects from ingesting chocolate, it seemed likely that the chocolate had then triggered a pancreatitis flare up.

Evie was started on anti-sickness medication and antibiotics and we continued with her fluids and strong pain relief. Despite this Evie did not seem to be improving. She was still not eating and seemed very depressed. It is very important that a patient continues to eat in hospital, and we were very concerned that if she did not start eating, she would deteriorate further. To enable us to ensure she was getting the nutrition she needed Evie had a feeding tube placed. Also, an ultrasound was performed, which showed why poor Evie was not improving as we would hope: Evie’s pancreatitis was extremely severe and the pancreas and surrounding tissue’s were very angry and inflamed. There were even areas of free fluid in the abdomen.

We were all very worried that Evie’s condition may be too severe for her to pull through and we carefully evaluated both her condition and prognosis every day. With continued dedicated nursing, extra pain relief and intensive care she finally began to turn a corner. Gradually Evie became more and more comfortable and hydrated. Finally, after a few very worrying days, Evie even began to eat by herself again and we could remove the feeding tube. At last we knew she was going to pull through and were all so delighted that she was wagging her tail again! After 8 days in hospital, Evie’s owners were overjoyed to have her come home.

At home Evie continued to improve day by day and her owners have been giving her lots of extra love and attention. Evie still looks hopeful if she spots any chocolate being eaten, but her owners are determined that she won’t be allowed to make the same mistake again!