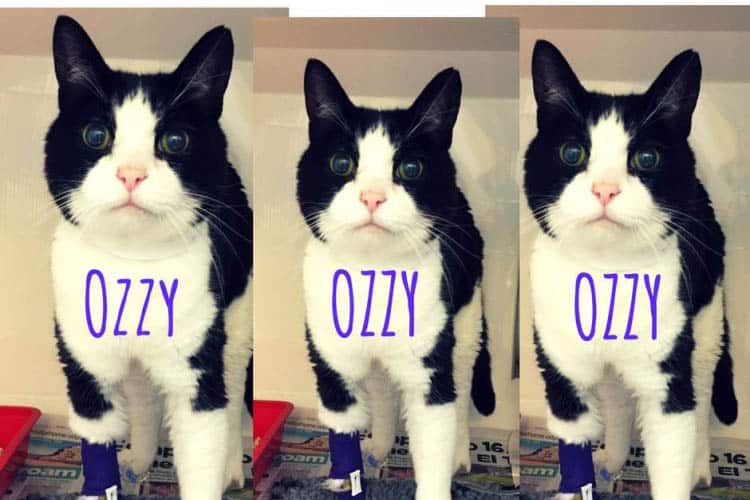 Reason for Nomination: Being brave through chemotherapy

Ozzy is a very handsome cat who is nearly 13 years old. He is still very active and always happy to see us. You would not think looking at him that he has been having chemotherapy for the last few months! He is the best patient and sits very calmly whilst we give his injections; enjoying his chin tickle as we go.

Ozzy presented to us because his owner was vigilant enough to realise that Ozzy was loosing weight. When we checked he had lost nearly three quarters of a kilogram over three months which is enough to cause concern. The first step to investigate reasons for weight loss would be a thorough clinical examination which was carried out on Ozzy in a consultation. The exam found no specific reason for him to be loosing weight. In this case a blood sample was recommended to further assess his internal organs. A full blood test was taken to assess liver and kidney function, glucose levels, electrolytes and red and white blood cells, including a thyroid level. The thyroid level is relevant to older cats as they are more prone to developing an overactive thyroid which can lead to weight loss amongst other symptoms.

In Ozzy’s case his thyroid results were fine and the results revealed mild elevations to his kidney and liver parameters. These are non-specific findings as they could be caused by a number of differentials. Therefore,as is the case with many patients, Ozzy needed further investigations before we could make a diagnosis.

The next step for Ozzy was to perform an ultrasound of his abdomen to have a closer look at his liver and kidney structure and all internal organs. Ozzy’s scan was performed by a European specialist in imaging, Andrew Holloway. Andrew visits us once every two weeks to perform ultrasounds and review x-rays for us. He is invaluable with his knowledge of medicine as well as imaging. Unfortunately he discovered that Ozzy had a small mass in his intestines and enlarged lymph nodes throughout his abdomen. While ultrasound had allowed us to find the mass, we were not able to determine what kind of mass it was by ultrasound alone. Sometimes we are able to take a biopsy of masses that we can see but in this case the mass couldn’t be sampled due to its small size and awkward position. Therefore, it was recommended that Ozzy had surgery so we could remove the mass and then send all of it away for analysis at the lab so we could get an accurate diagnosis and work out the best treatment for him.

Having done this we found that Ozzy has a type of cancer called lymphoma. There are several stages and grades of lymphoma so not all cats and dogs will have the same treatment. This is why it was important to find out which type Ozzy had before recommending any treatment. We referred Ozzy’s case to an oncologist vet who gave us a protocol for Ozzy’s chemotherapy. It consists of 19 weeks of treatment with a few break weeks in the cycle. Ozzy is required to stay with us for a few hours one day each week to have his injections.

Although many of the chemotherapy drugs we use in animals are similar to humans, there is an important difference between them. In humans chemotherapy is aimed to cure the cancer, which involves aggressive treatment and often has severe side effects requiring supportive medications and hospital stays. However in animals we aim to preserve quality of life during treatments, reduce hospitalisation times and side effects by using less aggressive doses and drugs to aim to control the cancer or put the cancer into remission rather than achieve a complete cure at any cost. Therefore we find dogs and cats tolerate chemotherapy much better and can continue a normal life during treatment.

Ozzy has currently had no side effects from his treatment and is still active and eating as normal. We wish him the best of luck with the rest of his treatment and hope to be able to provide him and his owner with many more happy times to come.