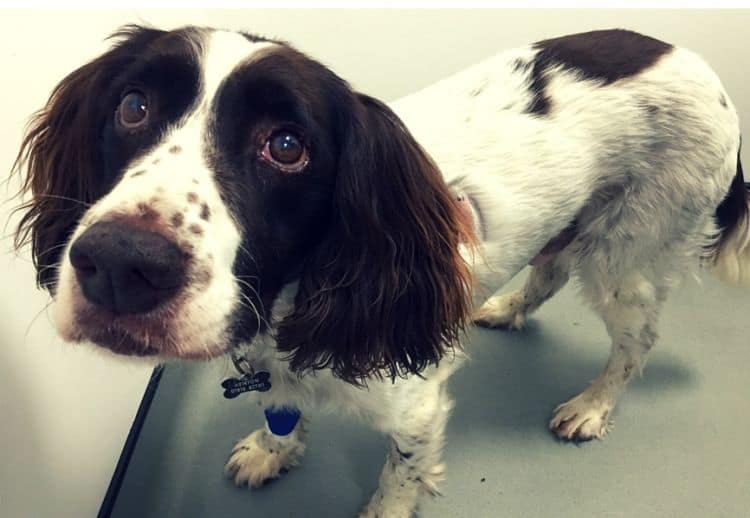 Being a True Gentleman Throughout his Stay in Hospital

Zebadee is normally a very robust and handsome Springer Spaniel. He’s had a bit of a hard time of late…

He was rushed to our after hours vet in Wimbledon late one Friday evening as he had been vomiting and was very unsettled. After initial treatment there he was brought to us for further assessment and treatment the following day. Zebadee was suffering from abdominal pain and so blood tests were run and x-rays of his abdomen taken. The results of the tests did not indicate anything specifically and so Zebadee was treated symptomatically – he was started on a drip as he wasn’t eating and he was given good pain relief. He was closely monitored.

Over the weekend Zebadee improved, he was brighter and much less painful on his abdomen but had still not eaten.

However, on Monday morning, though he was still bright, he seemed sorer again on examination of his abdomen. This was despite his ongoing pain relief treatment. An ultrasound examination was performed and, though the results were not conclusive, there was an area of suspicion in his intestines. Given that Zebadee had deteriorated in his pain relief the decision was made to take Zebadee to surgery to check the area of suspicion.

He had surgery that day, and thankfully it was the right thing to do. Zebadee’s caecum (the areas next to the appendix) had perforated meaning intestinal contents had started to spill into his abdomen. Without surgery he would have died.

It was unclear at surgery why this had happened – it can happen if something has been swallowed and pierced the intestines but no foreign bodies were found. It can also happen due to ulceration of the intestine or if there is a tumour affecting the intestine.

The affected part of the intestine was completely removed and sent to the lab for analysis. Zebadee also needed to have his abdomen thoroughly flushed to remove the intestinal contents that had started to spill out.

It took a number of days after surgery for Zebadee to recovery full, but that he did, and he is now home and well. The great news is that the lab confirmed the hole in his caecum was caused by an ulcer and nothing more nasty which means he should have no further problems now he has recovered. He’s been one lucky boy for many reasons!