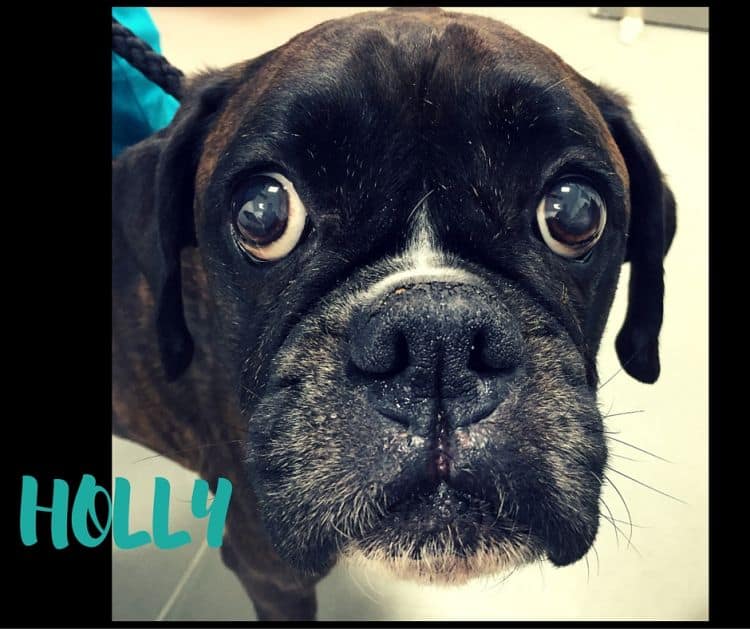 Having a beautiful nature while overcoming adversity

Holly is a beautiful Boxer dog who looks half her age (if only we all did!).

She came in early in the morning last month as she was very unwell: she had been vomiting since the night before and was subdued in herself. Worryingly her abdomen also looked as though it was a bit swollen.

We were instantly very concerned about Holly and were particularly worried that she had something called GDV- gastric dilation and volvulus. This is a very nasty and scary condition where the stomach swells with gas and twists. This twisting motion prevents the gas from escaping and cuts off the supply of blood supply to the stomach, spleen and intestines. Dogs with GDV can quickly deteriorate and go into shock and, left untreated, this condition can be fatal. GDVs can occur in any dog but are more common in deep chested dogs such as boxers, like Holly.

Holly was admitted immediately and placed on a drip. Supporting a patient with fluids is essential when a GDV is suspected, to try and prevent the patient going into shock. An urgent x-ray was taken which confirmed our suspicion – Holly was suffering from a GDV.

The only way to correct a GDV is through surgery. Without surgery, unfortunately, dogs with GDV will pass away. Thankfully Holly had been brought in to us early and within an hour of her coming into the practice, we had her in theatre.  Her stomach was decompressed and rotated back into its normal position. To prevent the GDV recurring, the stomach was then fixed into the correct position so it could no longer twist. Unfortunately, Holly’s spleen had been badly damaged due to its blood supply being compromised while her stomach was twisted. The only option was to remove her spleen which was done during the same procedure.

Recovery from GDV surgery can be slow and some dogs do not do well even when surgery has gone well. Holly did have a slow recovery. In the end she stayed with us for over a week after her procedure requiring intensive nursing and also a second surgery to get better.

We are delighted to report that Holly is, however, now back to normal. She’s back to being happy and healthy. We feel she truly deserves to be our ‘Pet of the Month’ as not only did she overcome adversity, she showed us real courage and love during her time with us.