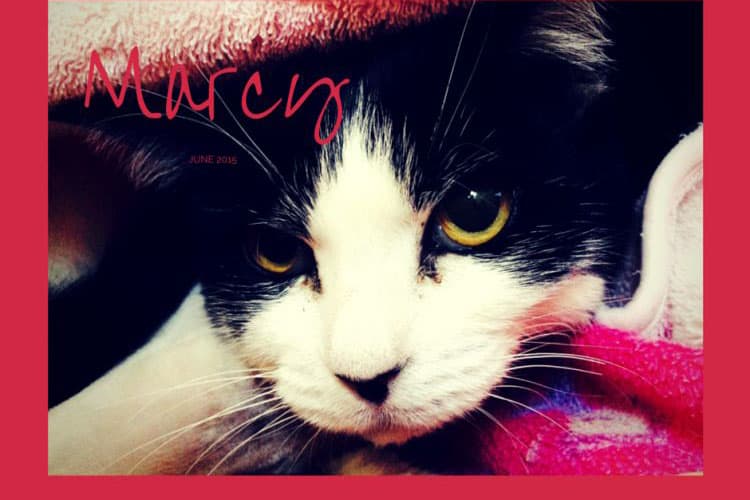 Marcy was brought in to see us as she had not been herself for a few days. She is a very nervous cat and so doesn’t like to be examined but when we carefully checked her over we found she had a very large wound on her neck and under her chin. It is likely this was from a ruptured abscess. Unfortunately the wound was obviously infected and Marcy also had a high temperature, all of which was causing her to be unwell.

In order to treat Marcy she was admitted to hospital and had to have a general anaesthetic to properly assess and clean her wound. The wound was very extensive and measured around 10cm in length extending under her chin and down her neck. To clean it we had to remove the dead tissue and flush the wound copiously before suturing the wound closed. We also took a swab to send to the lab. This allowed us to confirm which bacteria were present in the infected wound and, therefore, which antibiotics would be best to treat it.

Marcy also needed to be on a drip to support her and have pain relief and antibiotics. It was also discovered that the infection had spread to the lungs and poor Marcy had pneumonia as well. The swab taken from the wound confirmed the infection was due to nasty bacteria called Pasteurella multocida and, in order to treat this, Marcy was kept in with us for one week for supportive care, fluids and two types of antibiotics to help her battle her infection.

She thankfully is a very strong cat and managed to pull through this critical time.

As Marcy’s wound was already infected before surgery and due to the sheer size of it, unfortunately part of the surgical repair broke down. This is a common complication with this type of wound. For Marcy this meant the wound had to be re-stitched in places. However, in this second surgery not all of the wound could be closed and so part was left open to heal naturally. Marcy was able to stay at home for this treatment but had to be brought in to see us every day for the wound to be cleaned until healthy granulation tissue had formed. During this time Marcy never complained despite her nerves and reluctance to see us.

The great news is that Marcy’s wound did finally heal 7 weeks after she first came to see us. Her pneumonia also resolved well within that time too. Marcy was always a pleasure to treat and a very good patient to have. We hope she never gets anything so traumatic again.