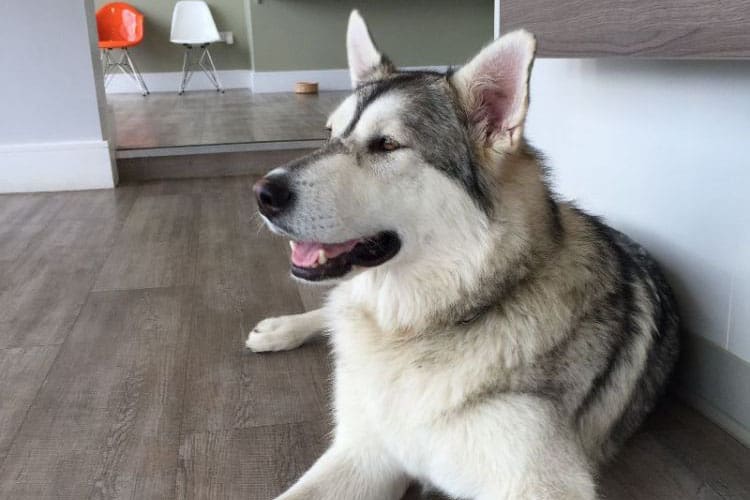 Sasha is a stunning 2 year old Alaskan Malamute who had a lucky escape recently. Sasha and her human family had been enjoying a lovely summer’s day evening with a nice playful walk in the park but at the end of the walk Sasha ran back to her owner with a large amount of blood gushing from a wound on one of her front legs.

As the bleeding was profuse, Sasha’s owners were very concerned for her safety and rushed her straight in to see us at Maven Vets. She was immediatley assessed by one of the nurses who quickly placed a pressure bandage over the wound in an attempt to stem the bleeding. These bandages can only stay on for a short time and when it was removed ten minutes later the profuse bleeding resumed – it was clear that Sasha needed some more help, and fast! In order to identify where the bleeding was coming from and to then stop the bleeding Sasha would need a general anaesthetic and surgery.

She was taken straight to surgery that night. A tourniquet was placed to temporarily reduce the blood flow to the area so that the bleeding vessel could be identified. The vets found a large ragged laceration to the back of her leg, just above the paw, that had cut through an artery. To stop the bleeding the artery had to be sutured. As there are many blood vessels supplying the foot, this could be done safely without compromising the blood supply to Sasha’s foot.

Once the main trauma had been dealt with the rest of the wound was assessed and we found that a small nerve and tendon had also been damaged; it really was a deep cut! These were carefully reconstructed to promote the healing process and the laceration itself was closed up with three layers of sutures. Finally a padded bandage was put on her leg to make her feel more comfortable and to prevent her from licking at the stitches and opening up the wound again!

Sasha recovered from the anaesthetic well and went home to her loving family the following morning. She needed antibiotics and pain relief and continued to do well at home, despite her best efforts to remove the bandage! Over time and multiple bandage changes (Sasha tried every colour of bandage we have!) the wound fully healed. In fact, you can see from the photo of her foot that it is now almost impossible to see where the wound was!

Sasha was such a well behaved girl the whole way through the process, we could not ask for a better behaved patient.

Undoubtedly, it was the quick thinking of her owners in bringing her immediately to the vets that saved her life that day. We are delighted she is now back to enjoying life to the full!