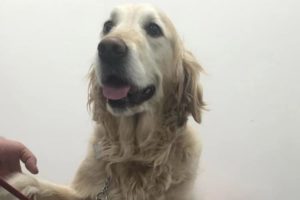 Candie was a beautiful girl who enjoyed the finer things in life, like sitting on chairs! She would make herself at home on her visits to us by jumping straight into the chair in the consult room. You would almost think she owned the place.

Sadly, Candie had a rare condition affecting her spinal cord and nerves which proved difficult to diagnose. It all began with an itch on her shoulder which she continued to chew and scratch despite medications. Being a Golden retriever and prone to hot spots (eczema) this was treated with superficial creams and a steroid spray. After a while Candie developed a limp on (coincidentally we thought) the same leg as the itch. It was intermittent at first but when it didn’t respond to anti-inflammatory pain relief medication we recommended x-rays to search for the underlying problem. Arthritis or a tendon strain were the main differentials at this time.

The X-rays taken revealed very mild arthritis of Candie’s elbows, not uncommon for a 7year old Golden retriever. Otherwise her spine, shoulders and the rest of her forelimbs showed no abnormalities on the bones. Joint support supplements and continued anti-inflammatory pain relief were prescribed, along with rest.

Unfortunately, despite these treatments, Candie still did not improve. Given this, we recommended she visit a specialist who could further assess the nerves in the leg with an MRI scan.

X-rays are good when looking at the bone structure, however an MRI scan can look at the soft tissues including muscles, tendons and nerves.

Unfortunately for Candie the MRI showed a tumour growing in her nerves coming out of the spinal cord of her neck and into the right front leg. This was causing the lameness as the nerves were not able to function properly. In time the tumour would cause the muscles to become progressively weaker on that side due to the reduced nerve supply and she would eventually lose the use of her leg. The only option at this stage was surgical removal of the tumour.

However, surgery was not without risk. The tumour was very close to the spinal cord and irreparable damage could have been done during surgery to remove it which may have meant she would not to be able to walk again. Thankfully, however, Candie’s surgery was a huge success and she recovered well, walking normally after the surgery. She was able to go home and enjoy herself again.

Unfortunately, we were aware that Candie’s surgery was not curative and, in time, the tumour would regrow. We did not know how long this would take. Candie exceeded all expectations and had an additional 13months of life, thanks to the dedication of her owners. She remained her happy self throughout. We miss her dearly.