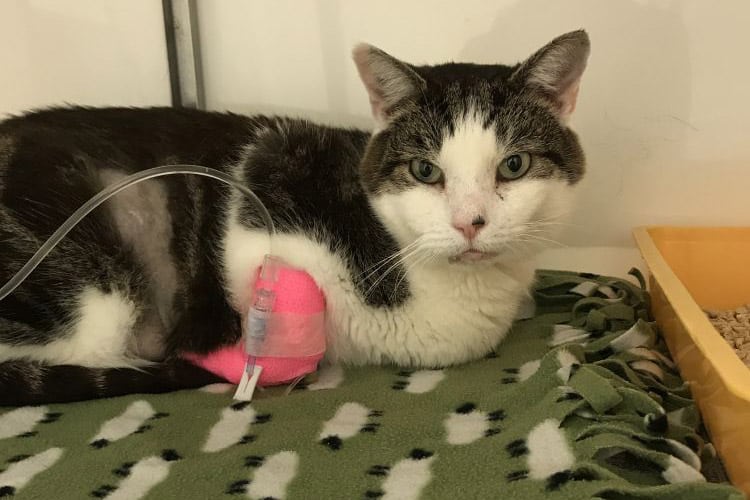 Beating the odds to overcome a mystery illness

At the beginning of 2017 he settled in very well to his new home, loving life, and could constantly be found snoozing on the couch, exploring the garden, or looking for food!

However, in late August Buster became unwell. He stopped eating which was very unusual for him and became very lethargic over a couple of days. So his owner brought him in to see us.

When we first examined Buster the main finding was that he had a very high temperature and one of the lymph nodes in his neck was larger than normal. As he was so lethargic, he was admitted into the hospital for investigation and support. Initially, a blood sample was taken which showed Buster had a high white blood cell count. This can indicate infection and, given Buster’s high temperature and lethargy, this was very likely.

So Buster was started on a drip to give him support, medication to try and bring his temperature down and give him some pain relief, and some antibiotics.

It is not uncommon for cats to have a high temperature if, for example, they have had a fight with another cat and been bitten. Though we couldn’t find an obvious wound we initially wondered if this might be the case with Buster. In such cases, response to medication is normally relatively quick. Sadly, in Buster’s case, it wasn’t to be.

Despite our efforts, Buster’s temperature remained high and he remained miserable. This meant we began further investigations to try and find out what was causing his high temperature. Buster had x-rays taken and an ultrasound to see if we could see a focus of infection. He also had a urine sample taken and sent for culture in case this was the issue. None of the tests revealed any answers.

In cases of infection, it is ideal to find the source of infection and to test to see which bacteria are involved so the correct antibiotics can be given to fight this. In Buster’s case, this wasn’t possible and, as his temperature was remaining very high despite the treatments we had given, we decided to give him more antibiotics to cover for possible causes of infection.

We also took another blood test to check if Buster was suffering from a virus such as Feline Leukaemia or FIV (the feline equivalent of HIV) as both of these can suppress a cat’s immune system meaning they can’t fight infections properly.

Thankfully both of these were negative. However, we were still no closer to finding out what was wrong with Buster.

Despite being with us for several days on intensive care, Buster continued to get worse. His temperature remained high, he wouldn’t eat and one by one his lymph nodes all started to become enlarged. We decided to biopsy one of these lymph nodes to see if that would give us the answer we needed. It didn’t.

By now, Buster had been with us for nearly 10 days. His quality of life was poor and we were concerned we were not going to be able to save him. As we have a visiting specialist, Andrew Holloway, who comes to the practice once a fortnight we asked him to scan Buster again to see if he could shed any light on the situation. His scan also revealed nothing further. This left us with only one thing left to try – steroids.

Steroid medication acts as an anti-inflammatory and an immune suppressor depending on the dose. In some cases, steroids can make a huge difference in helping but there is also a risk, especially with no definite diagnosis, that steroids could have the opposite effect and cause a sick patient to crash.

With Buster, despite our best efforts, we had no definitive diagnosis and so steroids were a risk. However, they were also Buster’s last chance. And so he was started on steroids by injection.

He was closely monitored as we assessed his response. And thankfully, he responded well! Within 24 hours his temperature began to come down and he started eating! Over the next few days, Buster slowly returned to his normal self – happy and bright. In total, he stayed with us for 16 days before finally being able to go home.

Since going home we are delighted that Buster has continued to do well – he is still on steroids though at a lower dose and we will try and slowly wean him off these. However, it is possible Buster will need medication for life. While his diagnosis still remains a mystery, he is back to his happy self and so the perseverance and dedication of his mum and the team were well worth it!