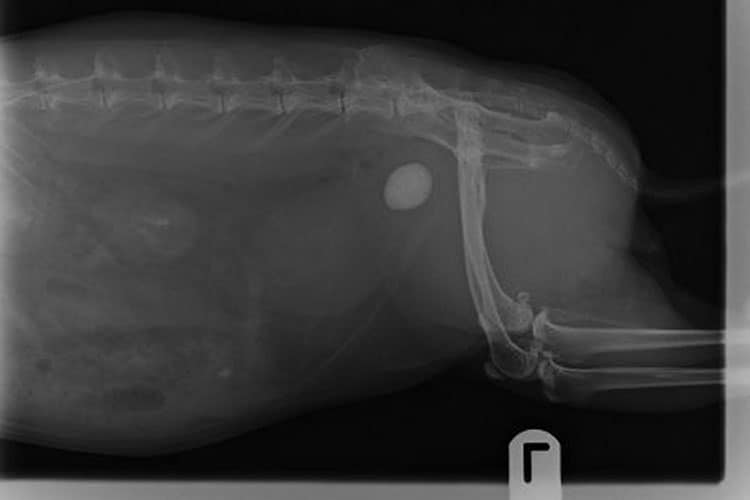 Being a lovely rabbit despite having a very large bladder stone!

Coconut is a gorgeous four year old male rabbit, who was brought in to see us one Friday evening as he had been having difficulty passing urine. He was off his food, and had been straining to pass urine. Our examination of Coconut showed he had a sore abdomen but a small bladder. We were concerned about two things – that he was painful and that he wasn’t eating properly. When rabbits don’t eat properly this can quickly become a problem for them even if it is not the main problem to begin with. Therefore we initially treated Coconut with pain relief and gut stimulants and asked to see him again the following day to reassess him.

Unfortunately the following day, though he was eating a bit better, he was still straining to pass urine and overall had not improved. On this examination, Coconut was found to have a large, firm, painful bladder and was admitted for further investigations.

Based on Coconut’s clinical signs and examination, we were suspicious that he might have a stone in his bladder. Bladder stones are very common in rabbits. They are most commonly composed of calcium, and tend to occur as a result of too much calcium in the diet. One way to prevent the development of bladder stones is to limit the intake of dietary calcium. In order to confirm if this was the problem with Coconut, he had to have a general anaesthetic so we could take x-rays of his abdomen.

The x-rays confirmed that Coconut did indeed have a very large bladder stone as you can see in the x-ray below. (The white ball is the stone within the bladder).

The stone was located at the neck of his bladder and so was causing an obstruction to the outflow of urine. This is a very serious condition, which could be fatal if left untreated. As the stone in Coconut’s bladder was so large, the only treatment option was surgery to remove the stone. Coconut was taken to theatre immediately and had an operation called a cystotomy. A large stone, approximately 2cm in diameter was successfully removed from his bladder. The size of the stone really was very large and must have been present for a long time before it caused him problems.  Happily, Coconut made a very quick recovery from his anaesthetic and returned home to his loving owners the same night for lots of TLC!

Coconut needed multiple check-ups after his surgery to ensure that he made a full and successful recovery. He was given the all-clear two weeks post-op, and is now enjoying life with a diet full of timothy hay, pellets and lots of leafy greens!