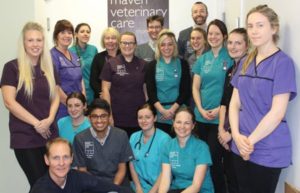 The team at Maven Veterinary Care in North Cheam are thrilled to have been awarded Hospital Status in a recent inspection by the Royal College of Veterinary Surgeons as part of the Practice Standards Scheme.

The scheme is voluntary and open to all veterinary practises in the UK. Those practices who choose to enter the scheme are rigorously assessed in all aspects of their patient care, premises and clinical and client care standards. Following assessment, the practice is awarded Core standard, General Practice standard or Hospital Standard.

As Hospital standard is the highest level which can be awarded, the team at Maven are delighted that their hard work over the years has been recognised. Ongoing, the team push themselves to review and improve standards clinically and for clients. Their ethos of exceeding expectations has led them well in this and the recent accolade of achieving hospital status is a real credit to their efforts.

In his report the Practice Standards inspector commented, ‘The friendly and motivated team were all very positive and open with their discussions and rightly proud of where they work and what they do.’

It’s a fabulous end to the year which also saw the team shortlisted in the top 3 for the Pet Plan Practice of the Year award earlier in the year.

Practice owner and Head Vet, Michael Morrice said, ‘Naturally we are delighted to have had a year where the efforts of our team and the high standards they work to has been recognised both in the Pet Plan Awards and now in achieving Hospital Status from the RCVS. In reality the dedication shown daily by the team to patients in our care and their owners is what this is really about. They care and it shows. We’re really pleased.’