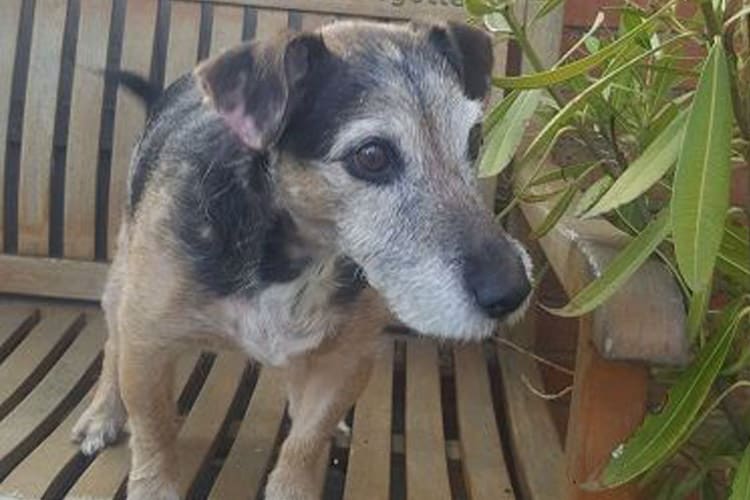 Being brave despite his skin falling off!

Micky was first seen in December last year with slightly flaky, itchy skin. At first the skin did not look severe, but over the next few days he became more and more itchy and distressed by his skin. Over just a few days Micky’s skin had progressed to become really inflamed and ulcerated with infected lesions across his body.

Often when pets develop skin problems we need to use a variety of treatments to try and help. Therefore, Micky was given anti-itch medication, treated with anti-parasitic treatment and given antibiotics and a special shampoo. Most cases of itchy skin in a dog are allergy related and allergies can be caused by fleas or other parasites, food or plants or pollens in the environment. Most dogs will quickly see improvement in their symptoms when we treat them as we treated Micky. Unfortunately, despite treatment, Micky’s skin was still very sore so urgent further investigations were needed.

The vets performed skin scrapes to assess if he had any mites, allergy bloods to assess if he was allergic to anything and swabs of his skin to see if there could be an underlying resistant infection. All these tests had come back negative and poor Micky’s skin was still not responding to the treatment. His poor little ears were bleeding because he was shaking his head so much due to being so itchy and his feet were swollen and sore to walk on. We were so worried that Micky was in distress and that the likely diagnosis was going to be quite worrying- at this point we were mostly concerned that he may have a skin cancer, or an autoimmune condition. (This is where the body attacks itself and it can be very nasty.)

Micky underwent skin biopsies as the next step to find a diagnosis. We were so relieved that the pathologist at the laboratory was able to fine evidence that the skin problem was not cancer but a condition called Pemphigus. Despite this being good news, Pemphigus is still a serious condition. It is an autoimmune condition and so Micky’s own immune system was attacking his own skin. However, there is treatment available and the prognosis was far more promising than if he had been diagnosed with cancer.

Micky was started on 2 different medications that would suppress his immune system to try and prevent it attacking himself. Unfortunately, a few days into treatment, Micky suffered a severe reaction to the drugs that were supposed to help him. He started vomiting and passing bloody diarrhoea and so he needed to be admitted to hospital for a few days to recover from this. You really couldn’t help but feel sorry for him- not only was his skin so sore but now he felt very poorly too.

Thankfully, after this episode, Micky turned a corner. We slowly reintroduced him to the immunosuppressant medications and thankfully he had no further reactions. He was so much more comfortable and much less distressed by his skin. Over the next few weeks his skin improved more and more- his ears healed, he was able to walk normally on his no longer swollen feet, and no longer had to spend all day scratching himself.

Now Micky is gradually being weaned off the medications and he is doing well though he is still rather bald. The medications he is on also slow hair regrowth but eventually, we expect this should improve. Micky however, doesn’t seem to mind- he knows he is gorgeous despite his bald patches!